As most of you know, our motorhome is a vintage unit, a 1996 Safari Serengeti diesel pusher.  It was actually made in Nov of 1995.  Bit by bit, things break, wear out, run down or leak.

The last two excursions we didn't have enough freon on the front dash air system to cool us from the front vents.  In those cases, we power up the generator and run the roof air conditioners to help keep us cool.  But we knew the dash system needed to get a good look-see soon.  Especially if we head down south some time this winter, we will need it in good working condition.

Steve had re-charged the system a few times over the years with cans of R134a freon, but this last time it would not take in any more freon, sadly it would not cool or kick in the compressor.  That usually means that there is too much air in the system.  It needs to be brought in, get hooked up to a machine to evacuate the remaining freon, and then have it pressurized to check for leaks.   We had this done once about 7 or 8 years ago and we were good until now.  Time to do it again....

We found a nice local garage able to do it locally: 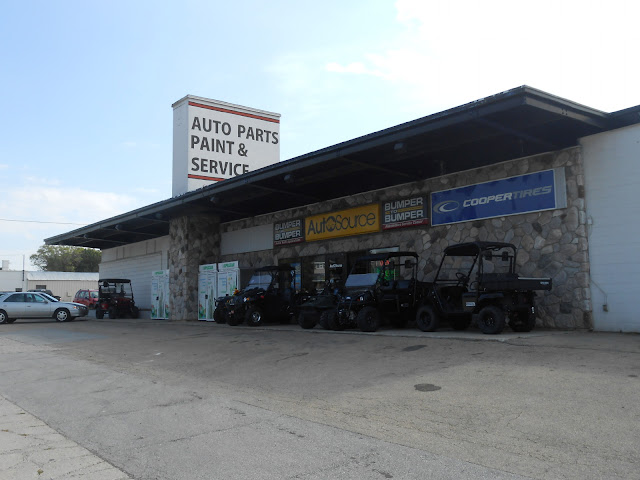 We pulled the rig around back, and we were about 10 minutes early for our appointment.  We were taken around back right away, and our mechanic Eric was right on the job.  He let us stay and watch by the rig, and allowed me to take photos.  (we hesitate to ever leave our rig unattended at a shop after a VERY bad experience up in Oconto that caused us a lot of money, pain and headaches)    So we request that we can observe as long as we promise to not get in the way. 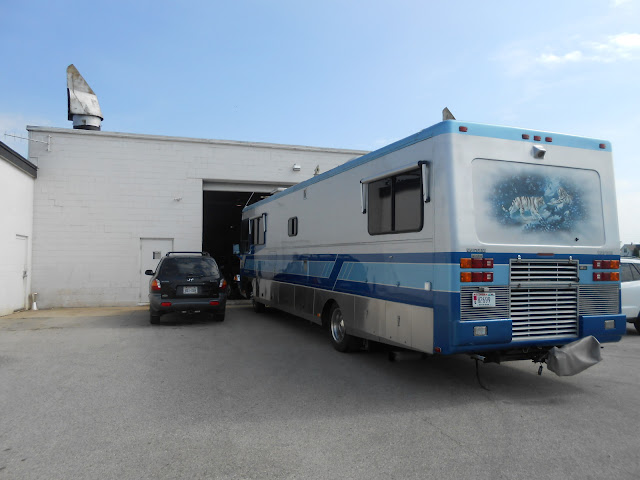 Eric brought out the evacuation machine, and said he has been working for this shop for three years now. He drives over every day from Menasha. Happily, he is closing on a home purchase in the area in one week and is quite excited to be a new homeowner in our city of Chilton. He is looking forward to an easy commute of only a few blocks by next week! 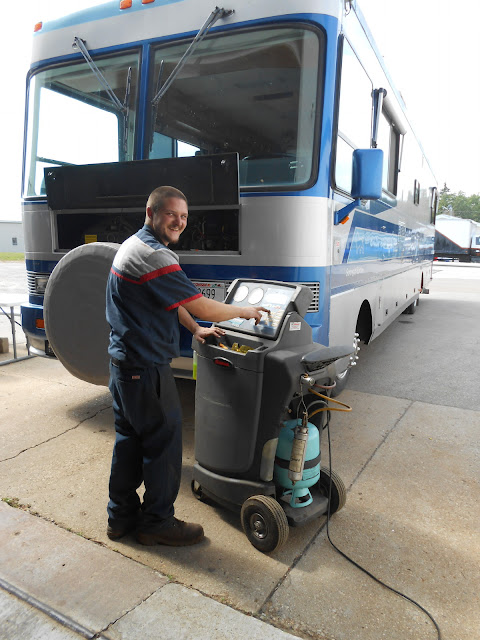 Eric had to remove the little caps on both ends of the dash air system. Ours is a Acme brand model 191633 and has both an inlet and outlet openings.  Eric hooked up the machine and set it to work.  It first has to suck out all the freon and the old oil stuff in the system. 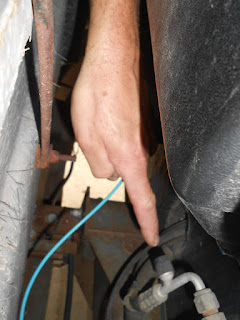 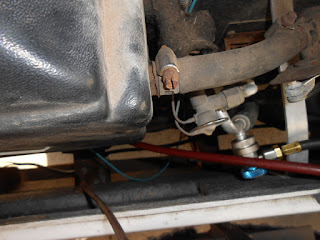 Then he pressurized the system and watched the gauges for any leaks for a period of time to be sure.  Next it was time to add the proper amount of freon and also some new dye and oil treatment fluid.  Our system capacity is 4.6 pounds, and Eric wrote it right on the case of the unit so we know in the future what it takes.  Here is my Steveio waiting patiently during the testing process for leaks.... 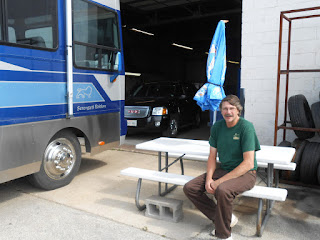 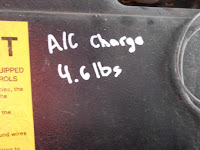 Now it time to fire it up and check the coolant from the dash vents.  Steve went back to check the compressor unit at the engine and noticed that one long rib of our serpentine belt has come off!  The belt is still working, but with one piece missing, we will soon see more of it destroyed.

Soooo, now we ordered a new belt, and it will be in tomorrow.  Good thing he checked!  He is thinking the tensioner pulley is causing some grief too, and it helped shred the belt. We we will also replace the tensioner at the same time.  Steve has an extra one on hand in his box of replacement parts.  Usually Murphy's Law is that if we have a replacement part on board, then the part in working action never breaks!  LOL    So while he changes the belt, he will put on the new pulley and keep the current one as an emergency spare. 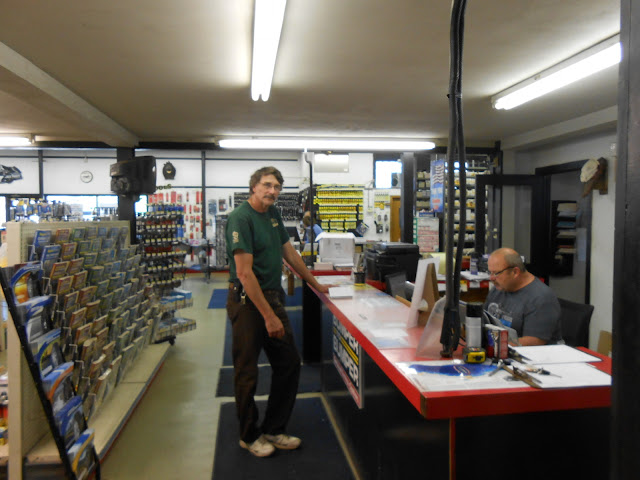 Steve looks pained.
Tom looks happy (or so he says) ~!

The serpentine belt will be in tomorrow and that is an additional $54
Steve will take care of installing that himself. 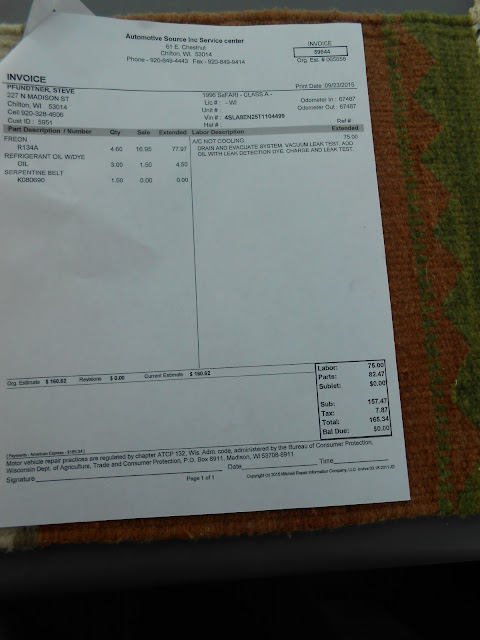 Out of 136 reviews on this place, they have a 99% rating.  I read the two negative ones, and they were quite minor.  The other 134 reviews were great. So I think we will now add this to a place on our list that we can return to.

Thanks Eric and Tom for the work today!

Posted by KarenInTheWoods at 9:08 PM