Back at Home and Getting Back Into the Swing of Things

Our two week gig as camphosts has come to an end.  The regularly scheduled hosts were able to return to the park on Tuesday to finish out the month of May.  We are scheduled for August and will do a whole month then.

I got the rig "road worthy" to head on home on Monday... while Steve was working his normal hours.  It rained almost all day, so I couldn't go out and shovel any firepits or clean any grills in the park.  I had wanted to leave a clean slate for Mike and Judy, but was not able to get out and about.

It didn't take long to get things ready to roll, and I even packed up the things to be carried into the house into big Aldi's shopping bags for hauling into the house again.  Also the dirty laundry was bagged up and ready to come in to get washed.  When it's done, we put it right back out in the rig again so it's ready for the next outing.

Steve was done at 4pm and he helped me with the last few things. Our awning was rolled up wet and needed to be unrolled later while parked in the yard to dry.  The mat was all muddy too, so we put that in a big trash bag and into the trunk of the car to take it home that way.  Why get mud in the carpeted compartments on the motorhome?

At 4:30, Steve drove over to the dump station to get rid of 2 weeks of "stuff" and give our holding tank a good rinse and drain.  I drove ahead with the car and had two silly doggers sitting with me.  Once we rolled into the yard, they were delirious with excitement about being back "HOME" ....  and got to pee in their little potty yard, and play with all of their toys again.

Steve got into Chilton at about 5pm  and lo and behold, the sun came out!   I sat on the front steps waiting for him so I could go out and block traffic on all four lanes in front of our house. He needs to back the rig into our yard.  We have a gravel parking area in the back section of our yard, and it's much nicer to back in rather than pull in nose first. 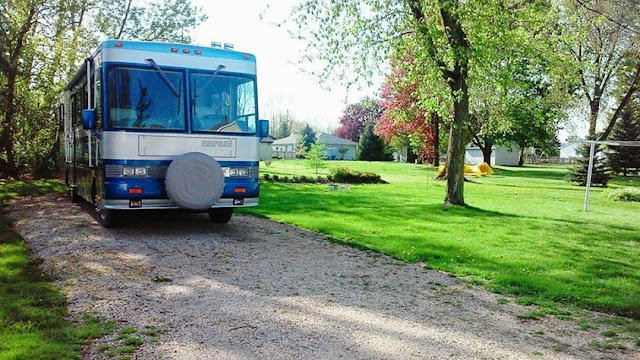 While I block the traffic, Steveio gets the rig into place, and I smile and wave nicely to the disgruntled drivers who have to wait a few seconds, less than a minute, to get the rig into the drive.  Geeesh!   Everyone is in such a hurry!  It's only 25 mph in front of our home, but you would think I was blocking a major expressway the way some of them act.  LOL 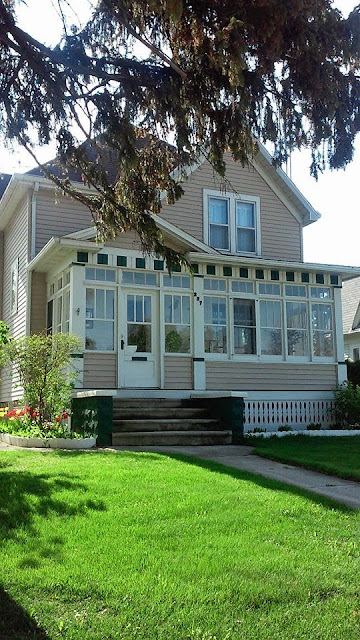 Everything was fine with the house,
and we had gone home during the week to cut the grass.

Our week was full of "catch up" with laundry, getting groceries, paying bills and putting away all my sewing and weaving things I had along for the 2 weeks at the park.  I was finally able to get to my looms and finish up three rugs for my etsy store that I had woven but didn't get hemmed up until tuesday.  http://kareninthewoods.etsy.com/

We decided to get some yard work done today... around Our Old House.   The last two years, this lovely hedge of variegated shrubs had been going downhill. This is how it looked before ..... in 2013 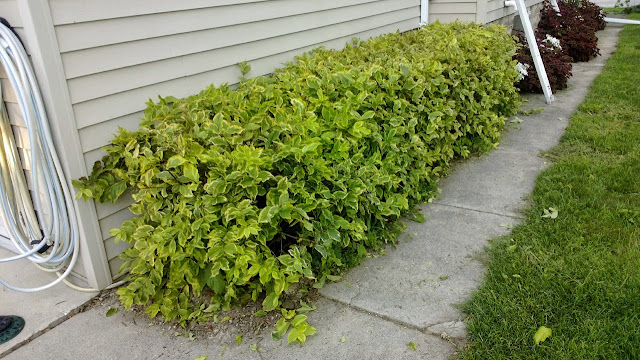 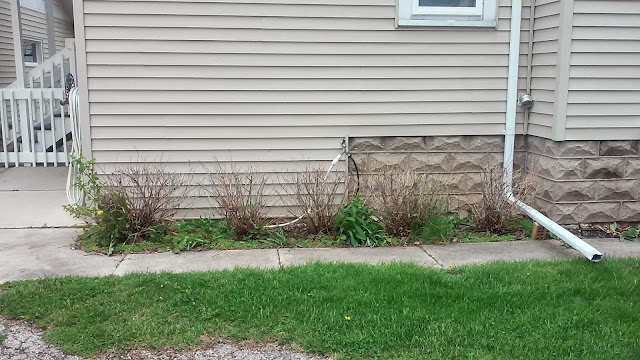 We got out the shovel and rake and set to work
There was a tiny bit of growth on four of the stumps,
so we dug them out to put them elsewhere in the back yard. 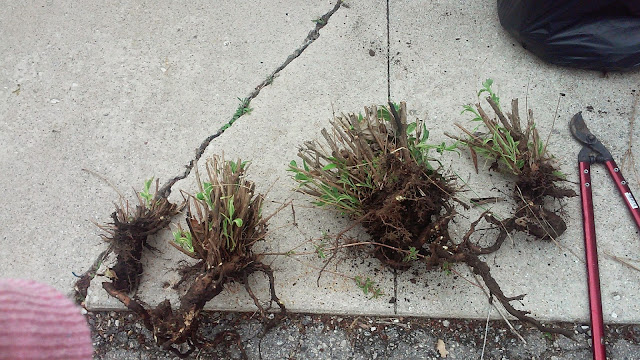 And THIS is my Mother's Day Present from Steveio!!!!
A trunk full of new plants!!!! 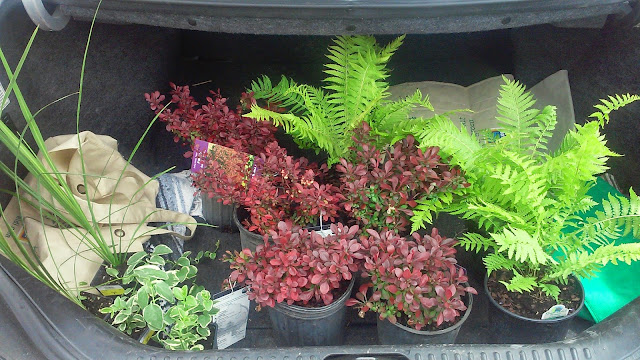 (5 dwarf barberry shrubs, 3 ferns and some spikes and vinca vines for my geranium pots)

I missed a finished shot of the barberry shrubs all in a row now where the old ones were.  Oh well, I will take one tomorrow after we spread some mulch around the plants.

In the meantime, we put these three fern clumps over on the north side of the porch in a shady area where we had to remove a dead arborvitae from last year.   Now that we removed that big dead bush, we can see more of the detailed lattice work under the porch. I have some clematis starting up the trellis and a hosta down below. 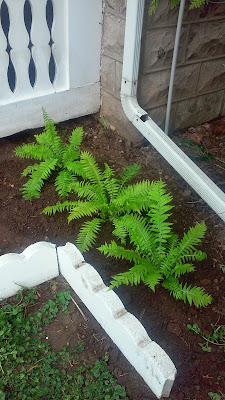 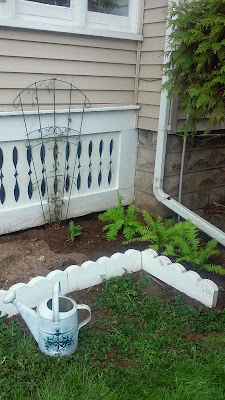 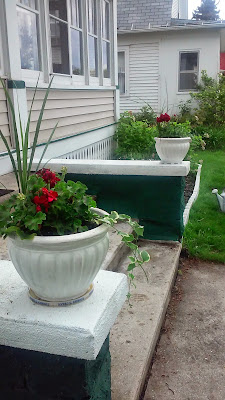 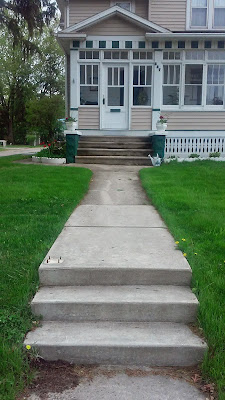 The geraniums had originally started out in this pot,
but I move them to the outside pots instead.
I put my indoor ivy into the special Mother's Day pot.
It has Chelsea and Clayton's feet on it so far, and room for
Jameson, Allegra and Mason's feet next time they come. 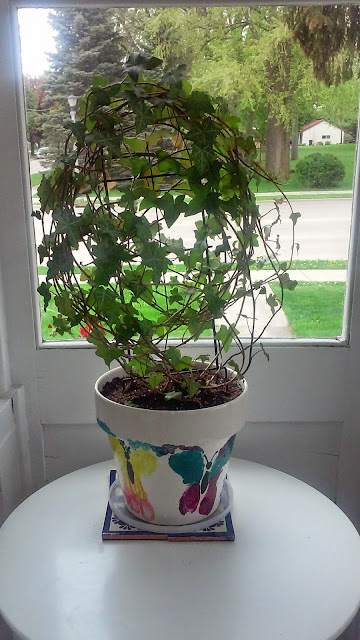 Yup, that's painted kids feet
pressed against the sides of the pot
and made into butterflies!
I want to keep this pot inside where it will be protected and cherished!

Together, we went around the house, pulling weeds,
watering plants,  and picking up sticks.
It felt good to do some yard stuff, when we work together like a team.
I still need some white and red impatiens
to put along the white scalloped borders across the front flowerbed. 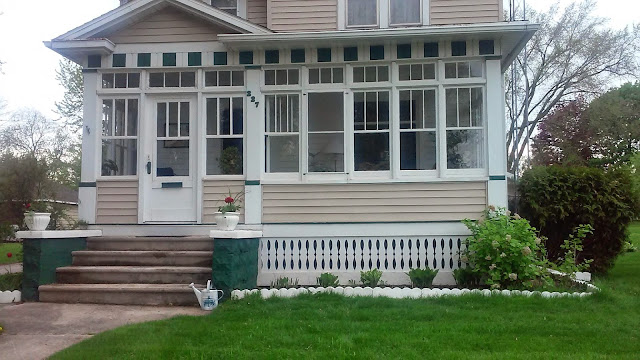 ps... it was Bath Day today at our house...
The doggers need to get spruced up for the big "Bark in the Park" gathering
with over 60 shelties at the
Timberattlers Ball Game in Appleton on Sunday. 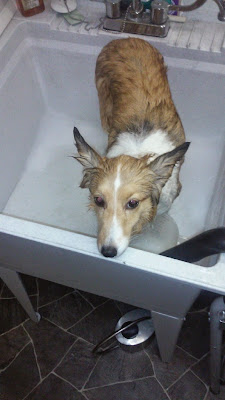 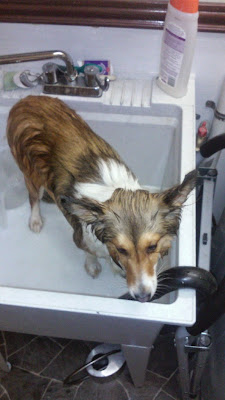 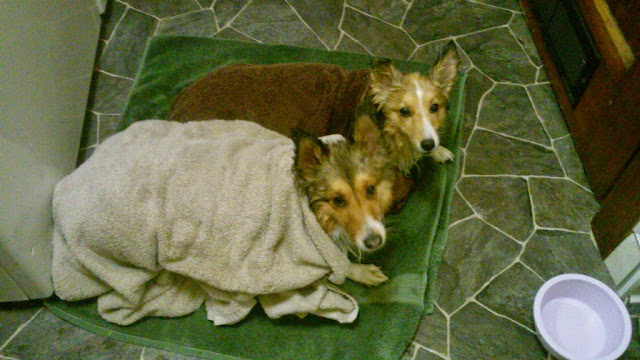 and here is a little video clip of them after their baths....

Posted by KarenInTheWoods at 10:34 PM