Seven Days of Sick... and update on daughter's kitchen

Well, it's been pretty crappy since losing Duke last Monday.  I can't believe it's been 7 days now.  I cry about him at the mere thought, and even little Finney is mourning.  He hasn't eaten much, so we have been tempting him with broth over his dog food to get him to clean his dish.  He looks for his buddy, and wanders around with a puzzled expression on his face.  We have been paying lots of special attention to him, and playing fetch indoors... as much as we can.  Steve took him outside for a bit today for ball in the backyard.  But since we are both sick, it's kinda hard when the temps are in the 30's and yucky freezing icky out.

On Monday afternoon I thought my puffy eyes and headache were from all the tears after losing Duke, but by Tuesday I was in full-blown head cold.  By Wednesday and Thursday it moved to my lungs which is not good for me at all. Friday I thought it was letting up a bit.  With the help of Nyquil and Allegra D I have been managing.  Saturday morning we got up early, packed up tools and the dog into the car, and headed back up to daughter Erin's house to help on her kitchen again.  See last blog post about what we accomplished so far.

As we drove up to Oconto, Steve was having a scratchy throat, and feeling a bit yucky himself.  We trekked on up to her house 70 miles and managed to make it through the day.  But I lost my voice and my throat was like swallowing razorblades!  In the afternoon, I got the two grandtots to nap while Steve and Erin worked... so I got in a nap too.  Lots of throat lozenges, herbal tea and honey, and throat spray is helping.


Some little stinker stole Granfaddah's tape measure
and scooted out of the kitchen... hiding on the loveseat to play with it 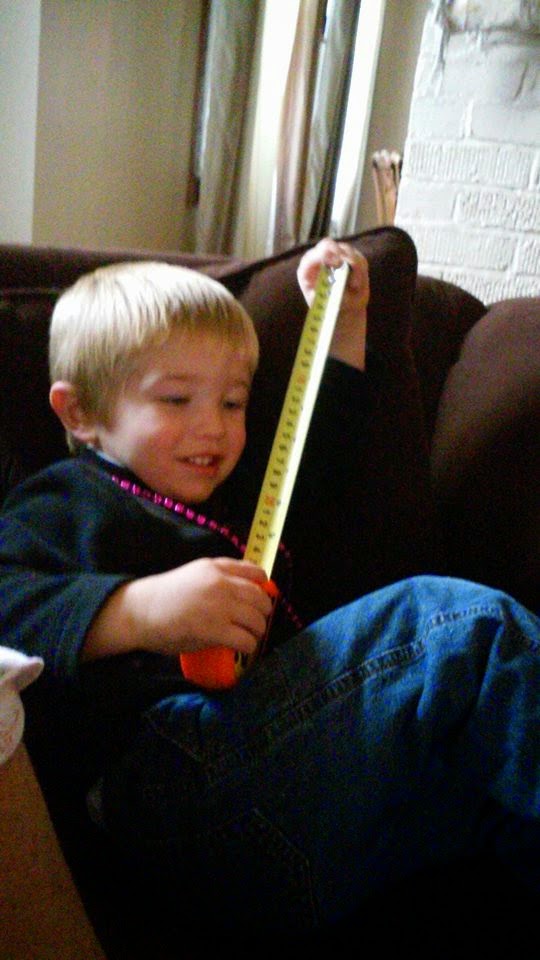 But it was a sucessful day as Erin's kitchen is really coming together!

Steve and Erin worked hard and disassembled all of the old plumbing, removed the old countertops and sink.... and then went to work assembling the new sink, faucets and cutting and installing one of the sections of countertop.

Erin chose a deep single basin sink this time instead of two smaller basins.  (I have a single basin in mine too)  and it makes sense.  She always uses the dishwasher for dishes and rarely washes dishes in the sink.  If she choses to, she has a set of dishpans to use if need be.  A higher faucet than before enables the washing of big kettles or her canning stuff makes perfect sense too. 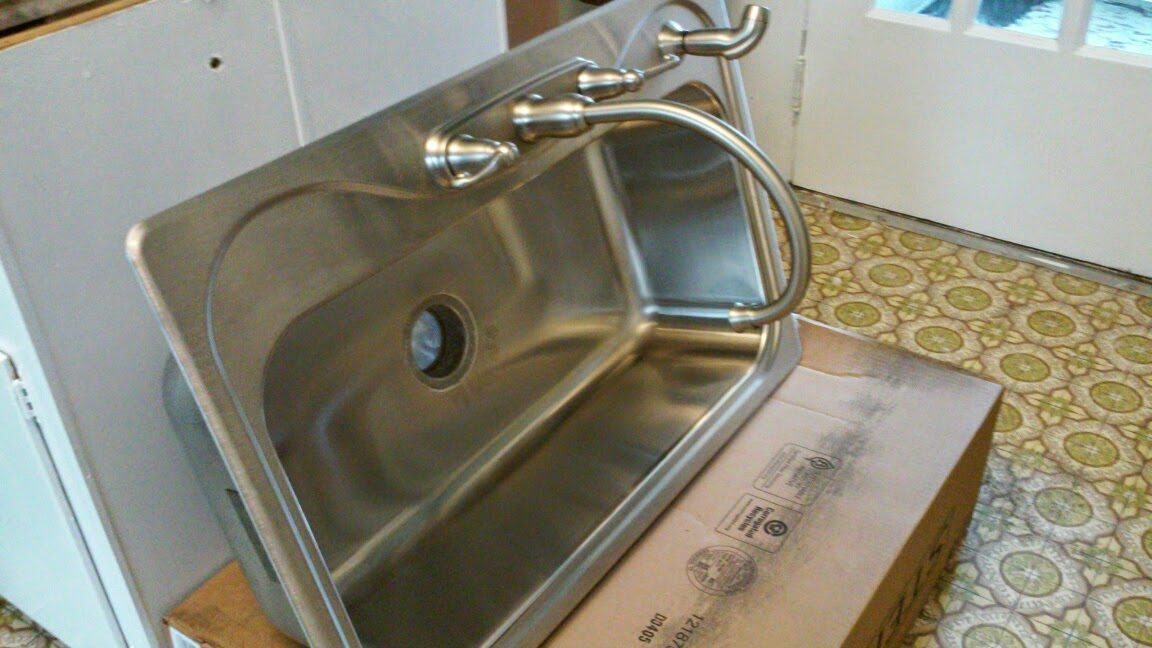 While Steve was out cutting the countertop to size and the hole for the sink, Erin started installing the back splash material.  What looks like tin is really a vinyl composite that is easy to install, scrubs well, and doesn't tarnish or rust like tin would. She also put some behind the stove too.... Looks great!!! (even if the pic is out of focus- sorry) 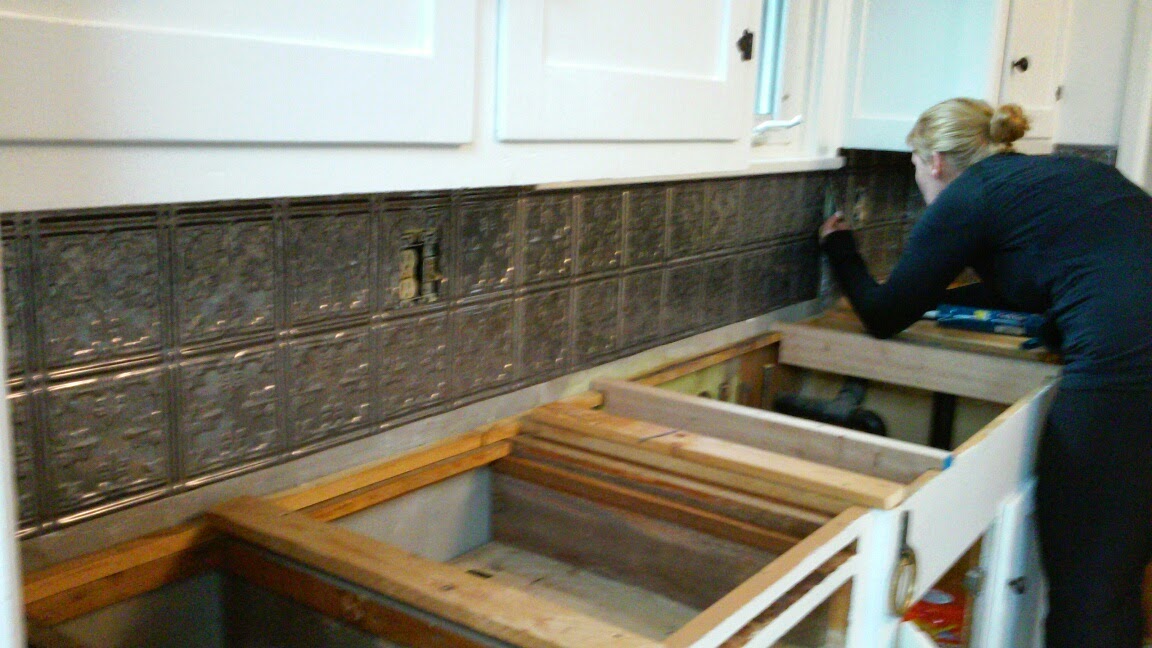 This is about the time I headed up to bed for a nap while they continued to work.  Of course all the old piping does not match up correctly to the new piping, and there weren't decent water feed lines to the dishwasher or the faucets to begin with.  After running to the hardware store and revamping the plumbing, Steve was finally able to install the sink, garbage disposal and disherwasher hookups again. 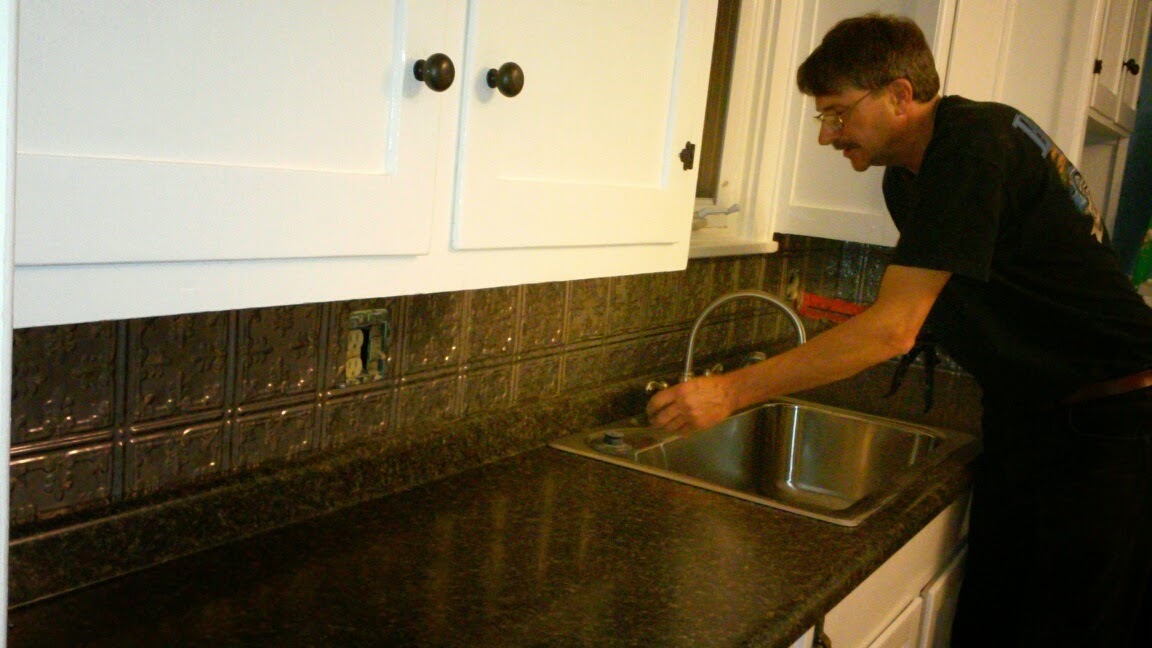 Erin was sooo tickled to get this far, as it took most of the day to do it!  There is one more section of countertop that needs to be precisely cut for the peninsula to the right of the main bank of cabinets.  We will get to that another day.  The outlets are going to be changed to new pretty ones and new switch covers over them too.

Once all the plumbing was hooked up (no leaks! yay!)
the kids woke up and had to try out the new sink! It works! 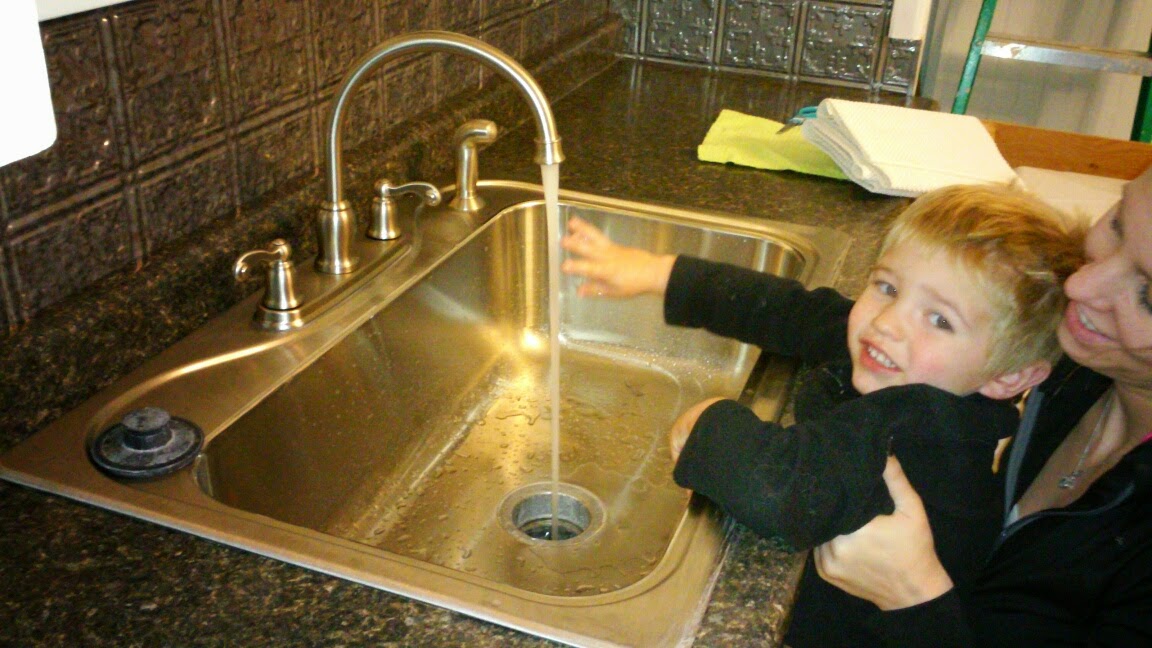 I think it's all coming together nicely,
considering how ugly it was to start with! 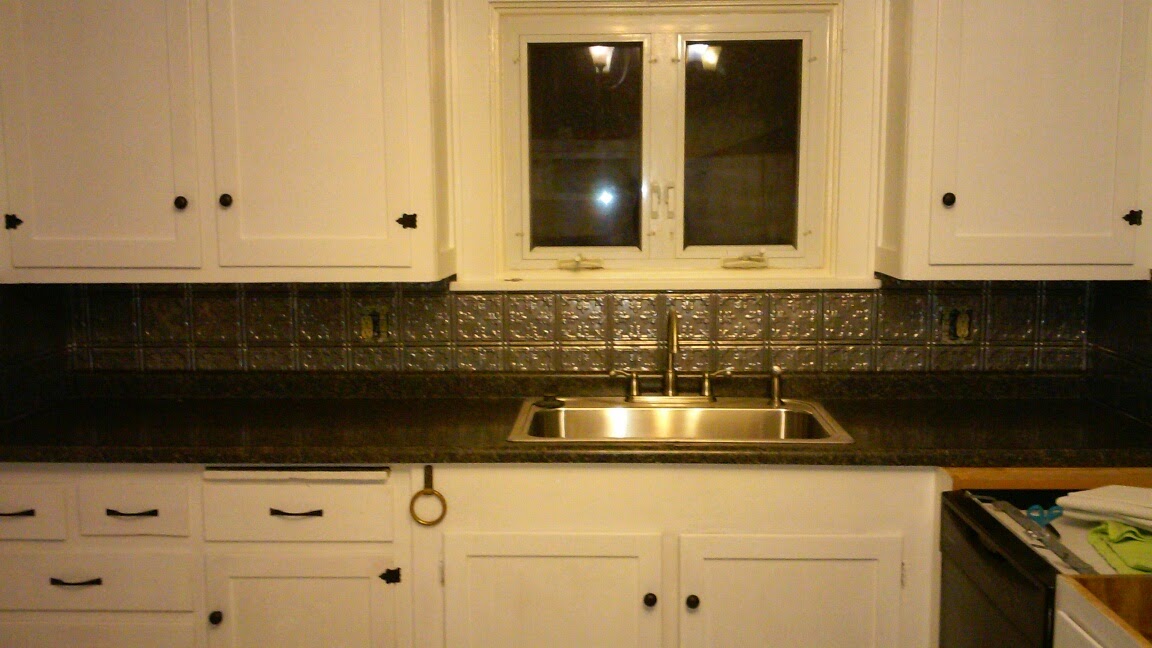 I think having a nice place to create meals in gives your cooking a flair and taste of love for your family.  Erin is a very good cook and enjoys canning vegetables, making jams and dehydrating fruits.  This kitchen is going to shine with her good taste and loving energy. 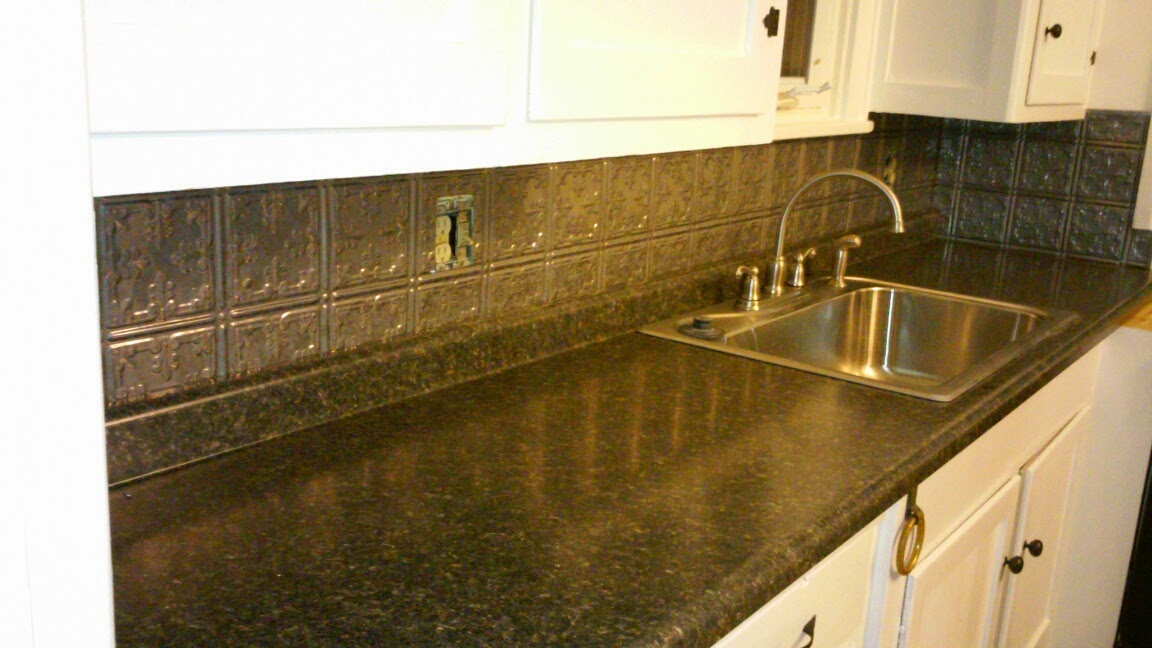 Steve was starting to peter out and feel worse, and I was struggling to stay upright.  He cleaned up and we left Erin to enjoy her "mostly done kitchen".  We headed back down towards Green Bay, and realized if we dropped off our son Dan's birthday present on our way down, we would not have to venture out on Sunday. I was too sick to even go inside, but we dropped off his present by the door while he was still out to dinner for his birthday with our daughterinlaw.  Sorry Dan, we didn't want to spread it any worse.

It was straight home after that and into nice hot steamy showers, douse with Nyquil and hop into bed!  This morning both of us woke up groggy, grouchy and raspy voices. I crawled back under the covers till after 10 am.  I am down to a whisper and we are both working on a bag of throat lozenges throughout the day. Coughing and hacking our way around the house isn't fun.

The upcoming weather looks bleak and dismal all around the country.  Here is what we are expecting in the pink section of Wisconsin: 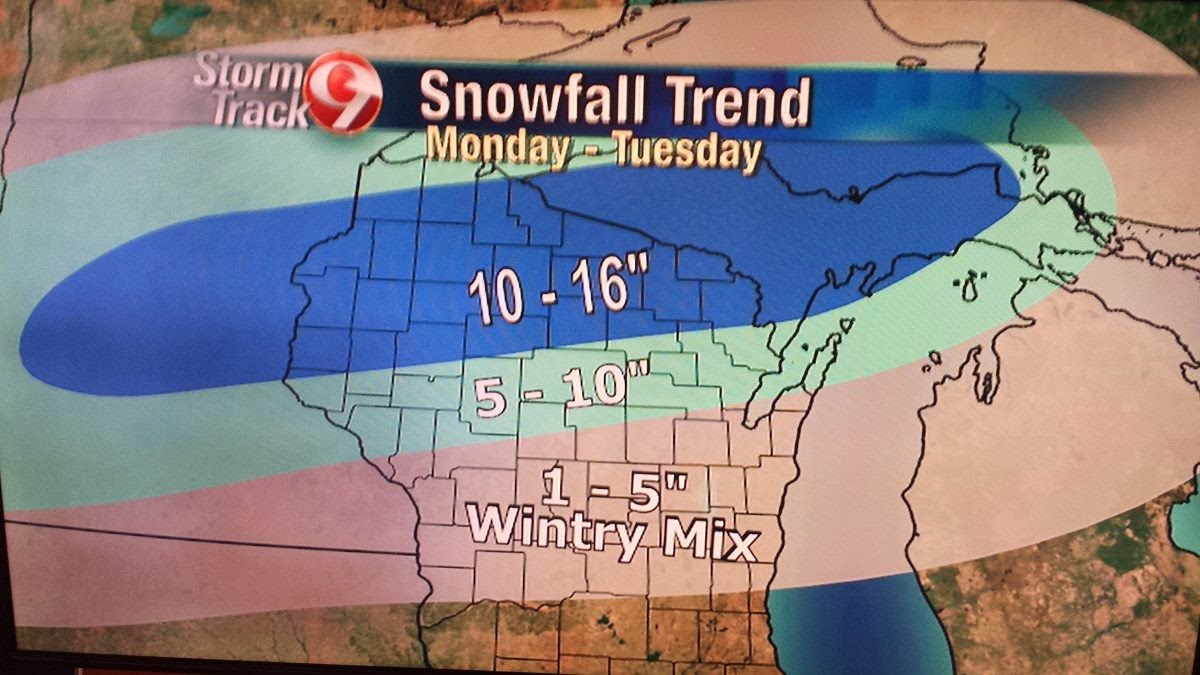 We did put fresh clean sheets on the bed for tonight, which will be good to crawl into after the Packer Game is over on tv.  That always feels nice.  We are curled up by the new fireplace, watching the game on tv, cuddling our little Finney between us.  Missing our Dukie Palookie. Sigh. 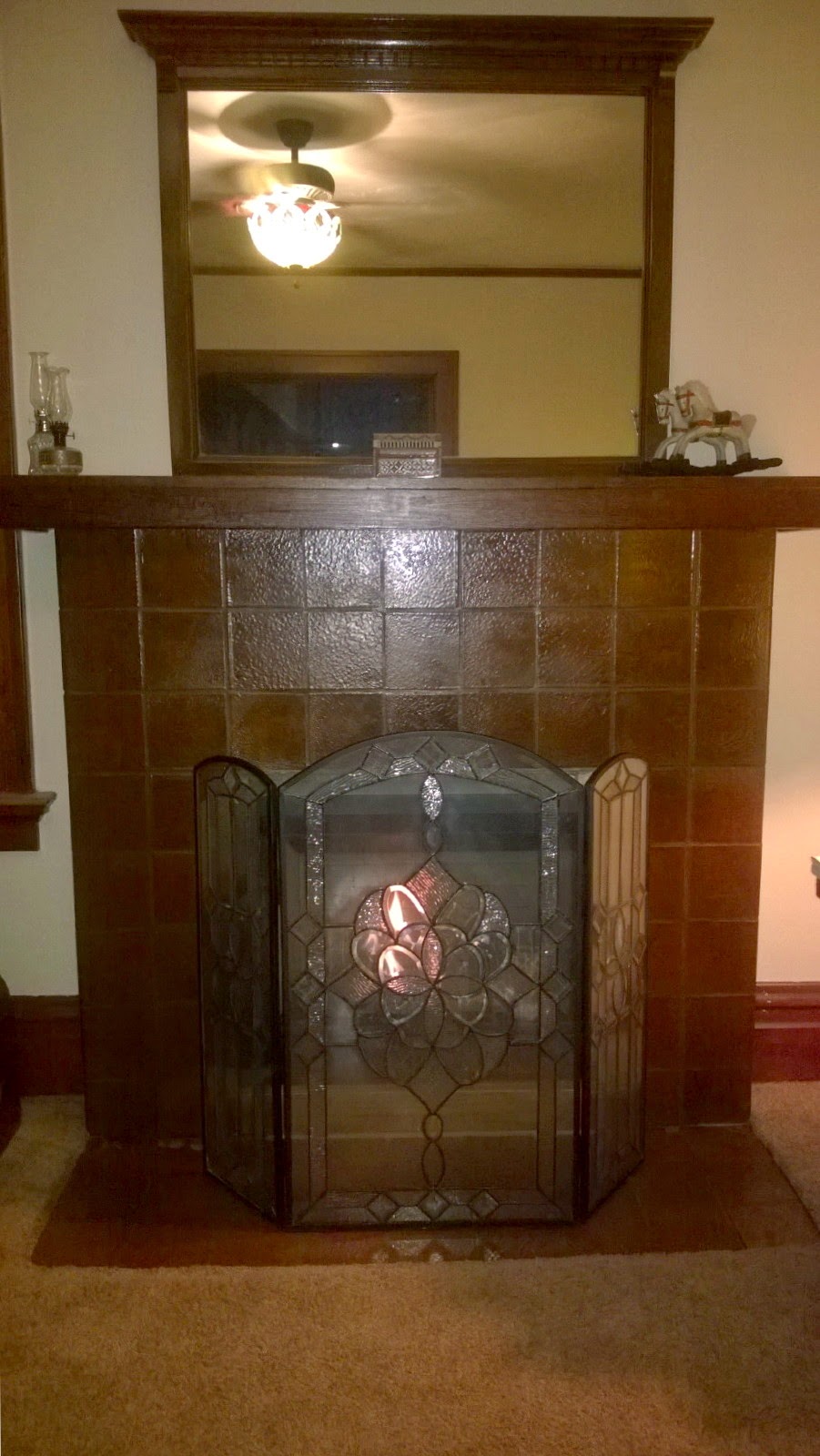 Posted by KarenInTheWoods at 8:30 PM