Yup....  ever since coming home from the vacation last April, we have not gotten out and about yet in our motorhome!  I think the tires were going to grow into the ground.  Soooo it was time to start loading it up and be heading out for a five day adventure.  How far are we going you ask?  Well.....   twelve miles.  Yes.  12 miles.

See, the Wisconsin Sheltie Rescue group is gathering for a reunion.  It happens to be held once a year at the Calumet County Park, just south of Steve's High Cliff State Park on Lake Winnebago.

Over 150 people and 120 dogs will be gathering for this year's reunion.  These are dogs who are somehow connected with the rescue, often not wanted or disposed of, or sometimes taken out of horrific situations.  They are assessed and then carefully adopted out to fully-screened and approved folks who will heal them, train them, love them, and promise them FOREVER homes. Lisa Martin is the driving force between all these connections of dogs and people, and raises funds to help take care of the medical needs and support during the adoption process.  And of course, all dogs are spayed or neutered to not create any more unwanted pets down the line. She also puts on this big reuion.  Where she gets the energy, I don't know!

There will be events, silent auction, picnic meals and a seafood buffet on Friday night.   I promise to blog more about that as events unfold.

We began loading up the rig on Tuesday as we made reservations for Wed-Sun at the park.  I gave the rig a good cleaning first, and Steve carried out and loaded up the items we normally keep in the rig all summer.  It took a while.  But a lot of those things could freeze during the winter months, so it's necessary to do a full clear out of stuff, and restock again in the spring.  (once the danger of freezing is past).

Wednesday morning I bathed both doggies so they will be fresh clean and fluffy...   and then I had an extra task to do.  By mid-morning, I got to run up to Green Bay and pick up our oldest grandson from his final day of KINDERGARTEN!   They were only having a half day, so that meant one or the other of his parents would have to take a half day off work to go get him.  It was Granmuddah to the rescue!

His class was going to assemble outside 15 minutes before the release bell would ring.  They lined up and sang a great song about

"we love our teacher,
and friends that we made,
goodbye Kindergarten,
moving on to FIRST GRADE"

Here.. you can see it for yourself:
Jameson's Kindergarten Goodbye

I had tears in my eyes as I filmed this, so I am glad I was able to watch now on video.  Oh my, that little babe is now going to be SIX years old and a First Grader???  What happened when I blinked my eyes?  I guess he is growing up?

We planned to take him for Thursday and Friday too... The daycare he is set up with for the summer charges for a full week, even if you only come a few days.  By us taking him, I could have some company at the campground for Thurs and Fri while Steveio buzzes up the road to High Cliff State Park to work each day.

After saying "good bye" to his teacher and friends, we hopped in the car before it started to rain.  Yup, it was raining all of the way to Chilton, but we stopped off at Taco Bell (his request)  and had a little celebration lunch. 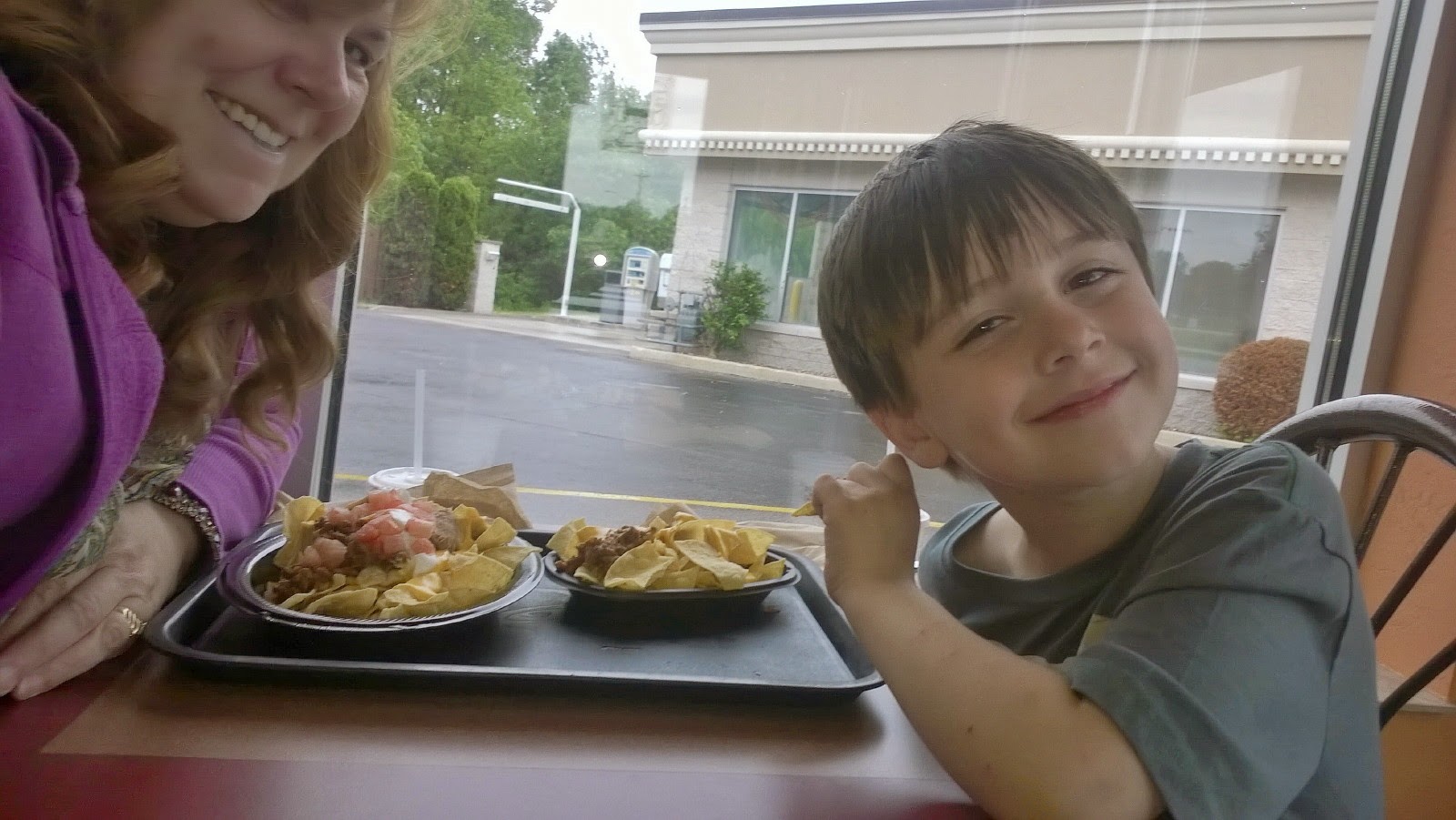 We waited for the afternoon at the house, while it rained and rained and rained some more. Not a good way to start out a camping trip, that is for sure.  While hanging out on the front porch, the Little Graduate took a wee nap.  The dogs were antsy to get out to the motorhome, and so was Jameson. 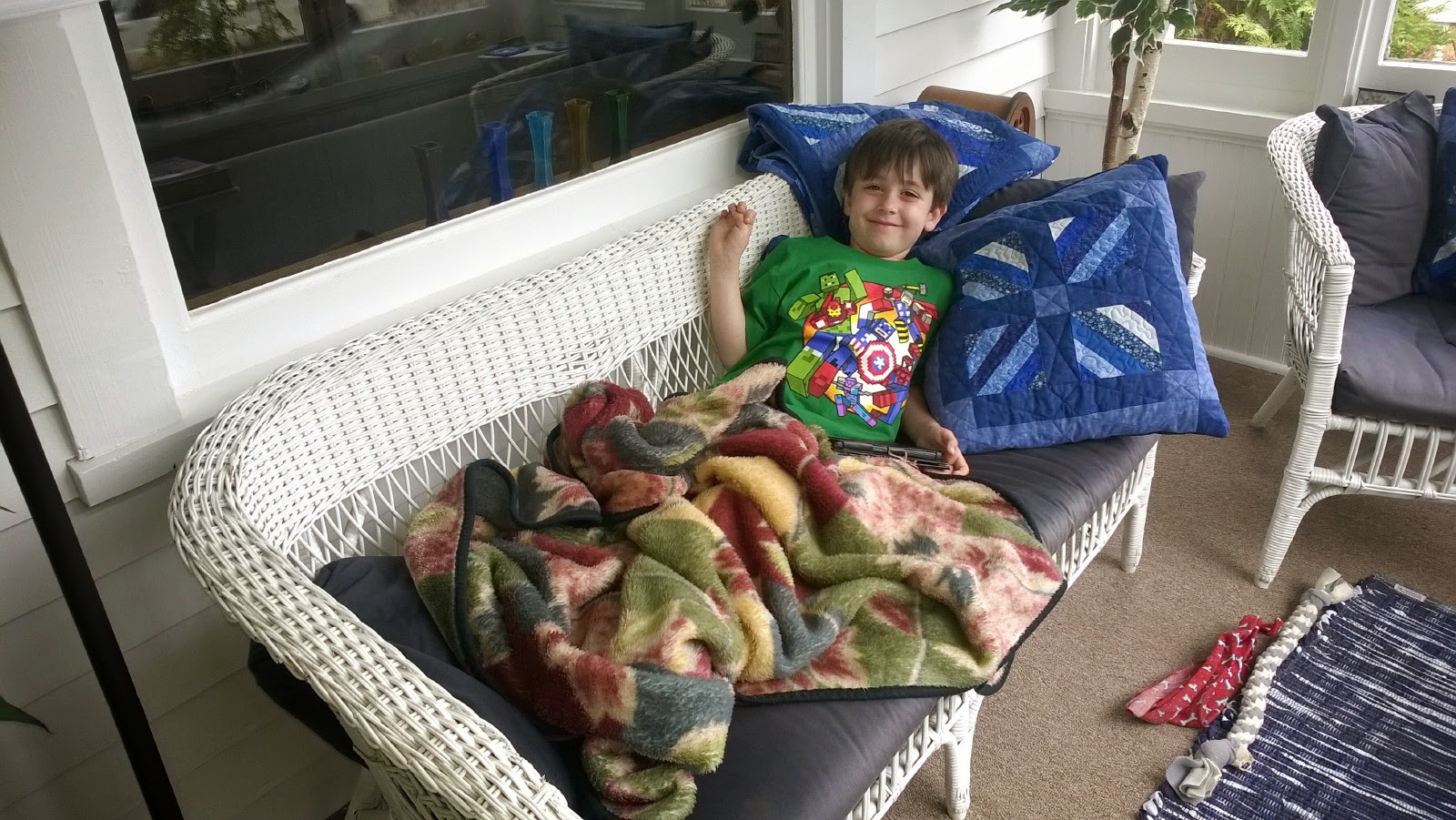 Once Grandfaddah was done with work at 4, we could head out.  One anxious little guy rushed to his car seat, securely strapped into the co-pilot seat in the motorhome.  (I followed in the car so we could have an extra vehicle at the park) 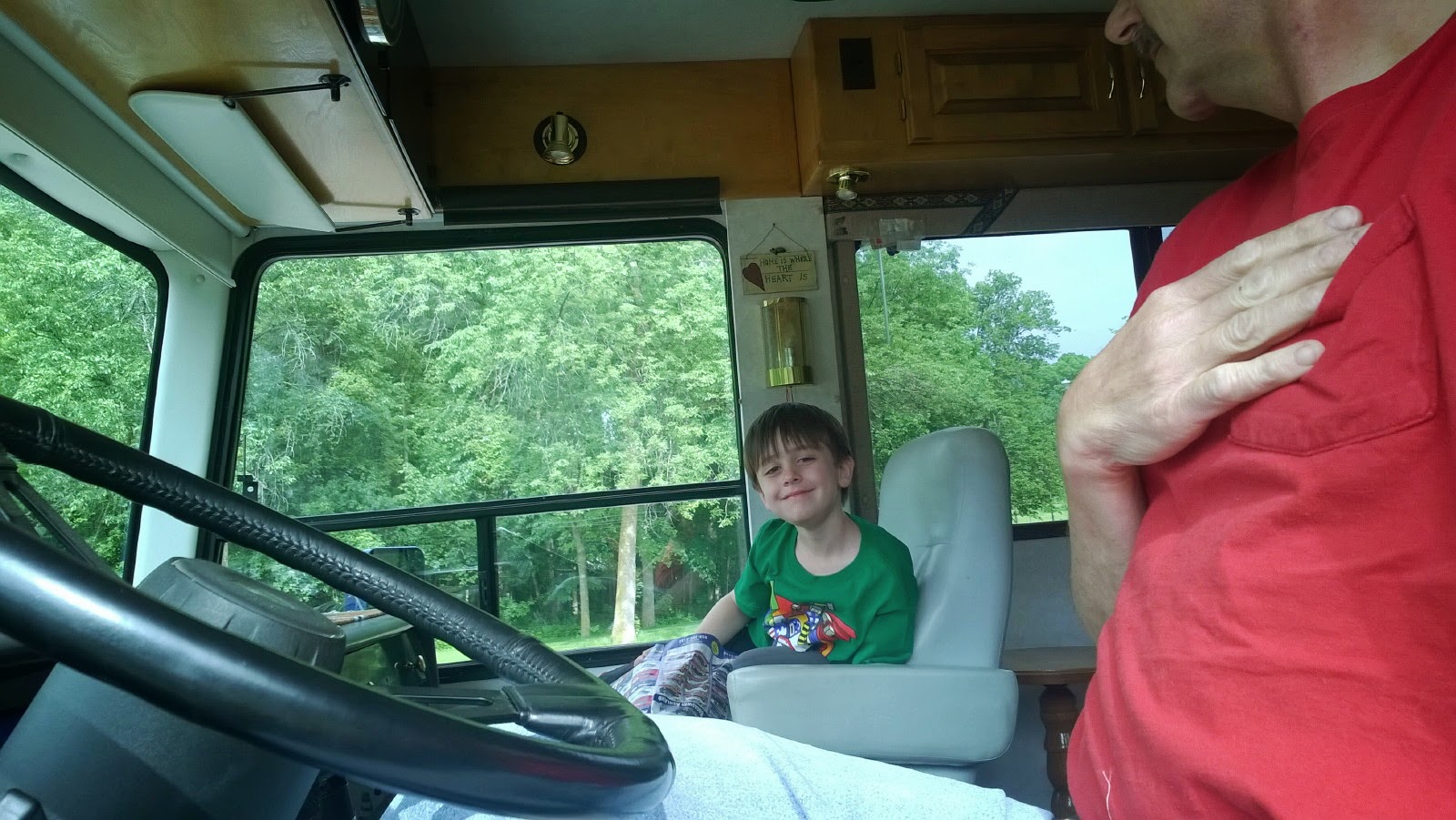 Oh my.. he was in charge of telling his Granfaddah where to go... and what amazing sight he saw as they crested the edge of the cliff and saw the big huge Lake Winnebago before their eyes.  Not only did it stop raining, but there was SUNSHINE!

We got situated in the park on our reserved campsite, and got out the hotdogs and mac n cheese to please a little guy's appetite.  Yup, we ate it too.  Just to please him I guess.   A few walks around the park with the dogs was next on order. 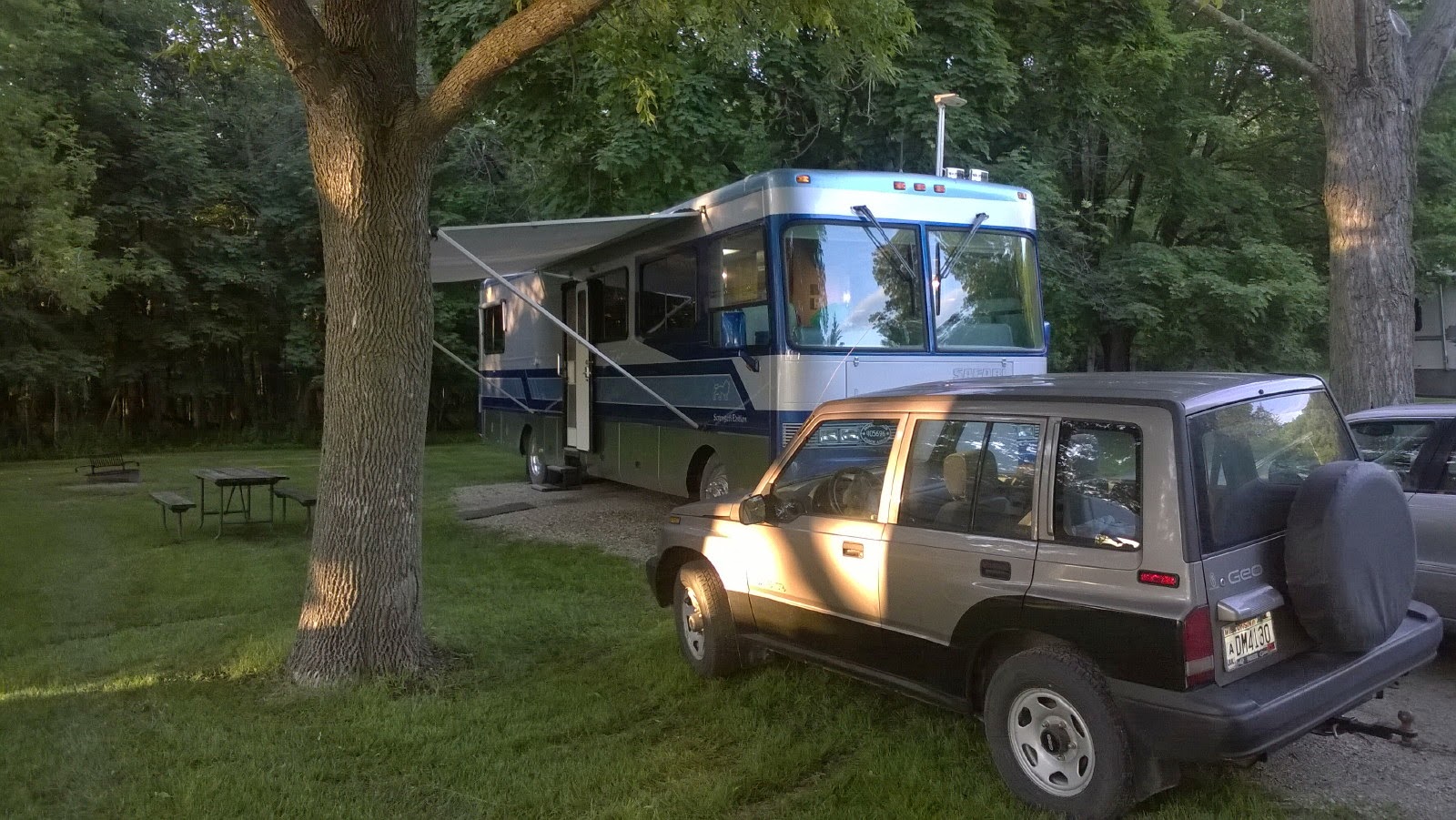 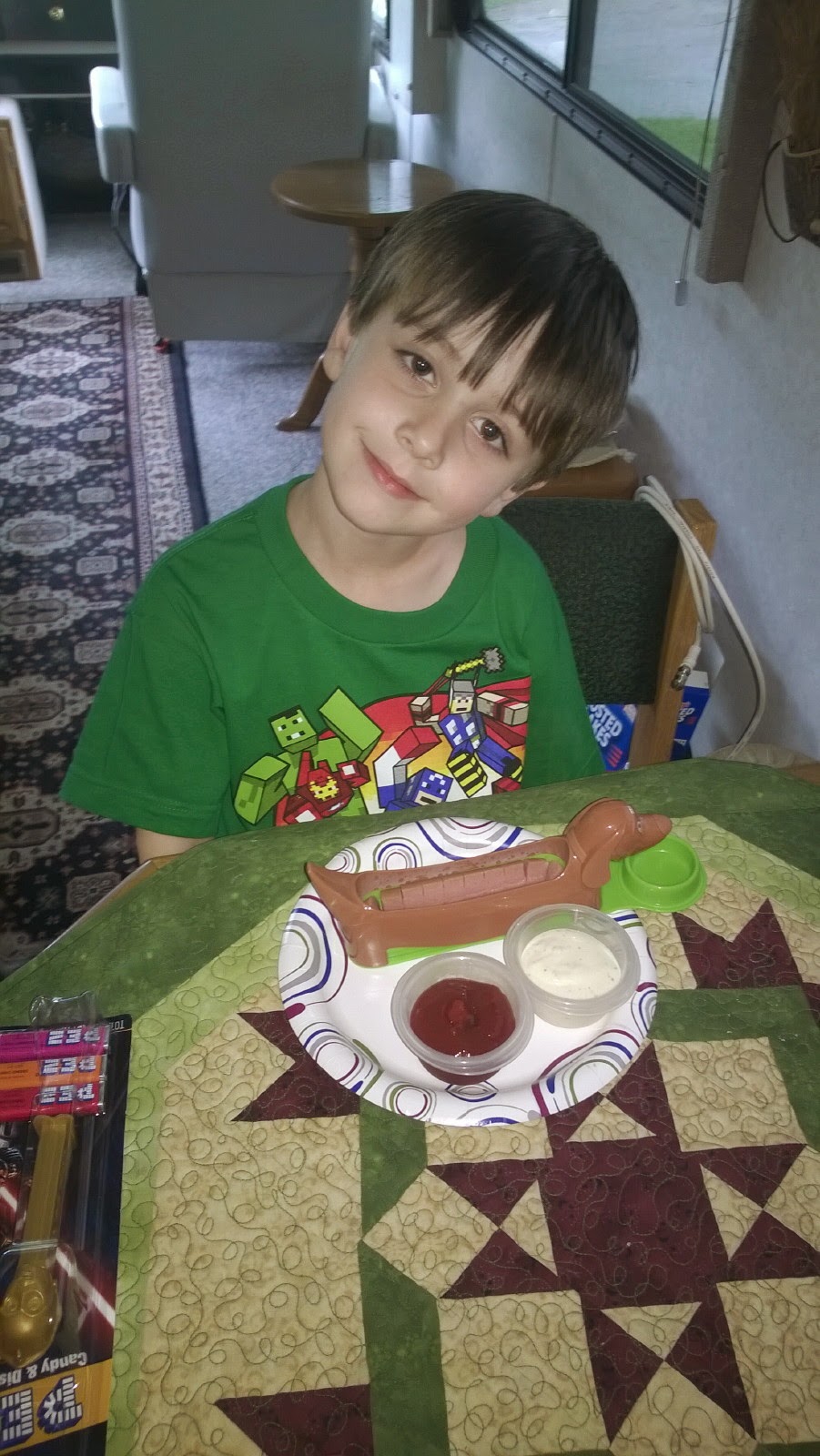 Instead of towing our Tracker behind the motorhome (and hooking it up in the rain)  we decided to leave it at home and run back there with the car to pick it up later. We got back to the campground in time for one more walk around the campground with the dogs... and saw this GORGEOUS sunset! 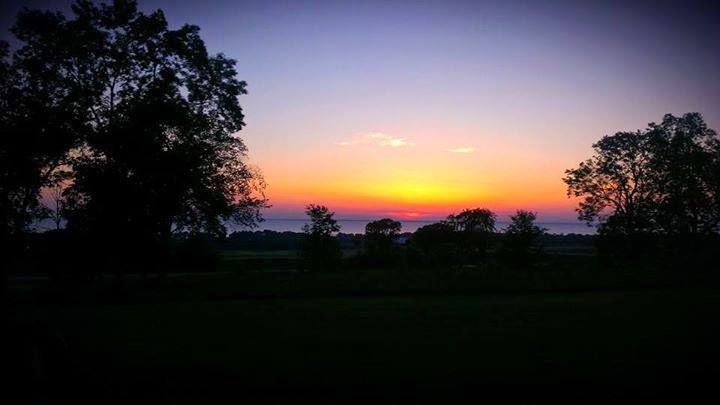 I didn't happen to have my camera along to capture it, (imagine that?)
so my friend Sarah Schneider Kopf graciously allowed me to use her photo.
Awww thanks Sarah!

We woke up now on Thursday to sunshine and no rain!  Let's hope it stays that way.  Grandfaddah got ready for work.  His Little Tiger shared breakfast with him.  Note the Giant box of Frosted Flakes for my Big Tiger, and the little box for the Little Tiger? 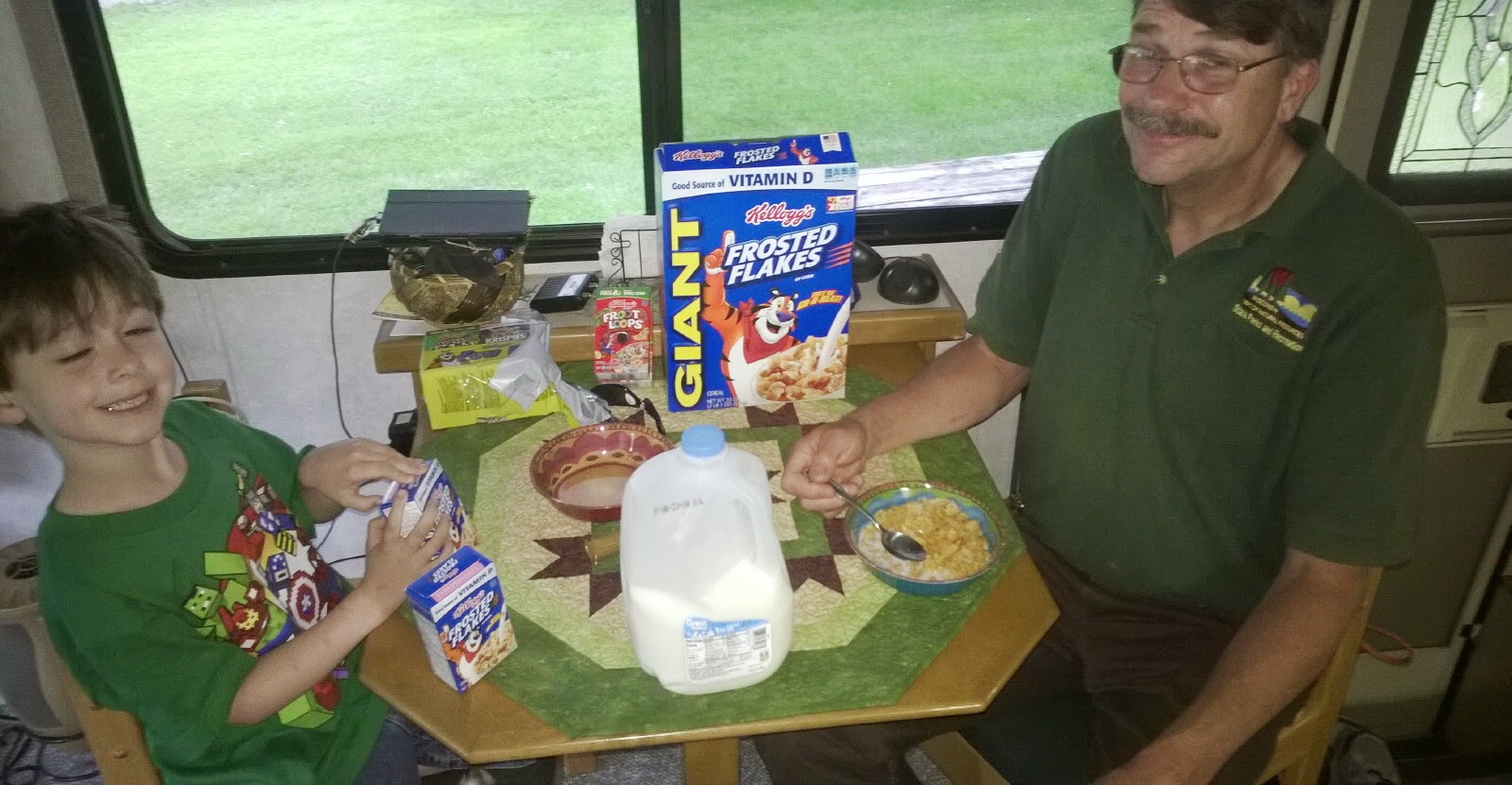 
Posted by KarenInTheWoods at 9:09 AM