A Tale of Three Blogs - Third one Cute Grandtots Visits

I pooped out last night at midnight without writing the third post I promised.  Well, now I am up at 7 a.m. and sipping coffee, so I thought I would finish up the third post.  Gotta have something for everyone who reads my blog.  I already covered Motorhomes and Fibers in the last two blog posts. This is one about family and grandtots visiting!

We were very excited to learn that the Memorial Day Parade in Chilton would be passing right by our house!  We have never lived on a "parade route" before  and I was always envious of those who owned homes on a parade route.  They could sit in their chairs in front of their own home, have their bathroom handy, invite over family and friends and have a picnic cookout afterwards!

Two of our three kids came with their families---  the Locks and the Pfundtners.  The Wades were at a Brewer's Game in Milwaukee.   We all lined up in anticipation of the parade.  It turned colder and damper as the morning went on, but what the heck, we were going to see a parade! 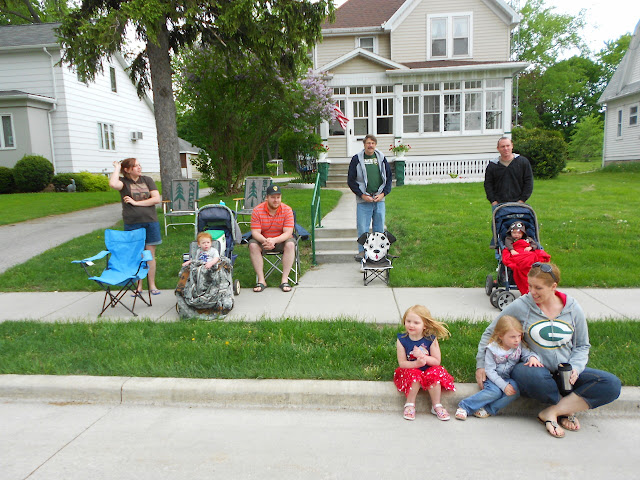 The kids were happy to see TWO marching bands, a wonderful display of veterans, a boy scout troup, and a baton twirling gaggle of girls rag tagging along.  One group handed out candy, so the grandtots got some tootsie rolls. 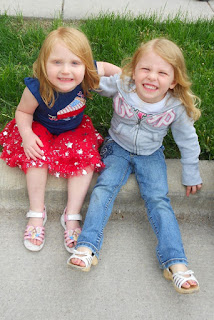 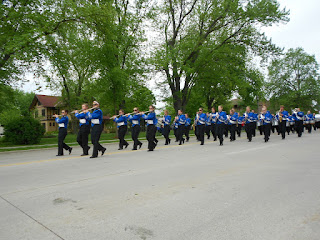 
But that was okay, it was getting damp and starting to drizzle outside.  Our son and son-in-law carried in my huge cabinet with the Singer Treadle Machine to my Loom Room (I wrote about it in yesterday's blog)   We hung out in my Loom Room for a while.  The girls had to work on my rug loom, and then I kept them busy sorting out the drawers from the treadle machine.  They took out all of the old buttons to create a "button jar".  Remember those?   My mom always had one, and so did Grandma Kafehl. 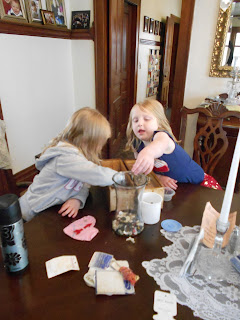 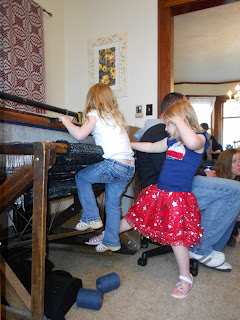 The little guys were kept busy with toys and books and treats.  But they were aimlessly hoping the weather would get better so they could go outside to play and run around.  Just look at how wistful they are, hoping the rain would stop.    We did manage a short time in the park nearby, but it was sprinkling again so we had to come back to the house. 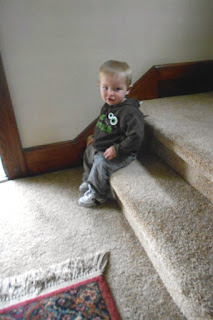 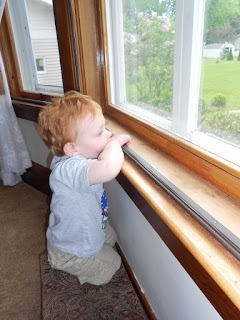 We grilled out BBQ ribs, in the shelter of the garage to cover Steve as he manned the grill.  Oh well, we just had an Indoor Picnic for the day.   After the meal was cleared away, the two girls entered into the Great Candy Land Game Playoff....    Daddy Dan and Mommy Erin were the helpers and other two players in the game. 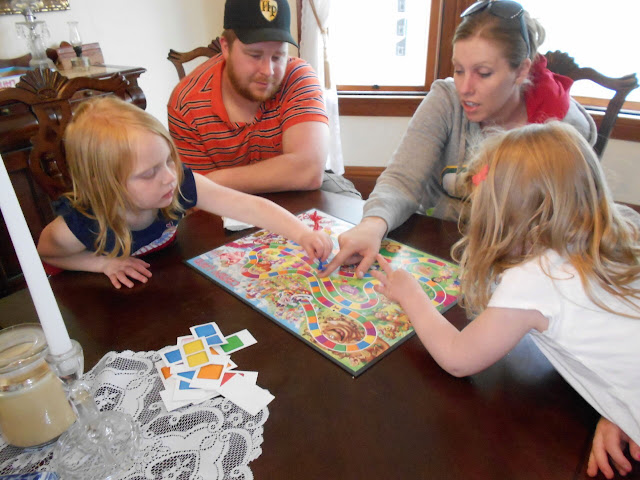 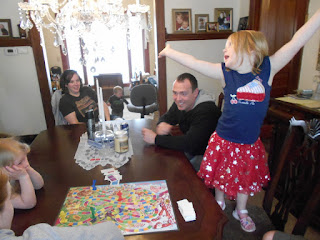 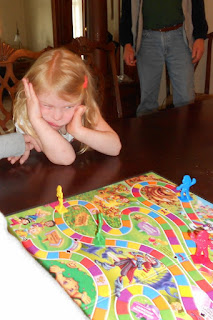 All in all, it was a good day for reflecting on those who fought to keep our country free.  And a nice day to spend with family.

Speaking of family, the following week was Steve's annual Father-Son fishing trip with his dad and brothers.  They try to go each year to someplace special for fishing and confabulating.  Extra special gathering this year as some of his family members are dealing with serious health issues and all are mourning the loss of their mother and wife, Mary Ann, who passed away in December.  Great bonding time as they headed north in Dad P's motorhome for five days of fishing.

While they were gone, I was not going to be lonely, no sireee!   I managed to snag little Chelsea and Clayton from their day care on Friday and kept them overnight---  what fun to snuggle and cuddle them in the morning when they woke up.   We didn't get a long time to play though, because they had to be back home by 10 a.m. to get ready for a wedding on Saturday.  But that was okay, I still got to spend some time with them. 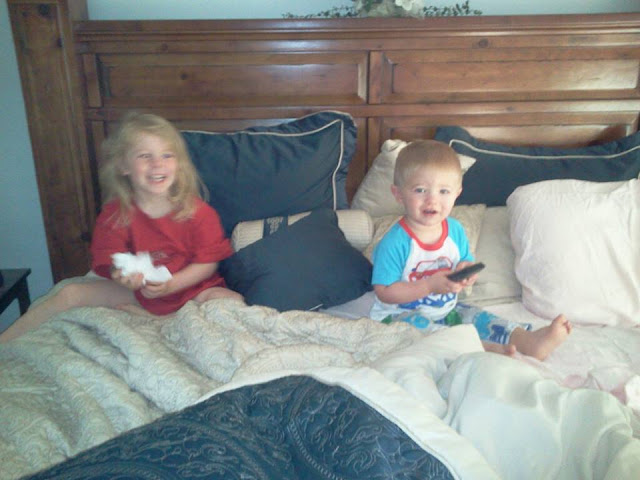 On the way back from dropping them off in Oconto, I swung by and snagged Jameson on my way through Green Bay.  Now it was his turn to come for an overnight!   (and keep Granmuddah from being lonely)    We didn't get to see him on Memorial Day, so it was extra special to get him for a visit.

He hauled his little suitcase into the house and we got busy with some activities to keep him busy.  He helped me water all the flowers, hauling watering cans from the rainbarrels.  It was so cute to watch him figure out how the water level would go down as he opened the tap at the bottom to fill the cans up.   Work work work he did.... and he had a goal in mind.   See, he mentioned he would like to buy a Hot Wheels Lamborghini and a Hot Wheels Audi and needed to earn 2 dollars to buy them. 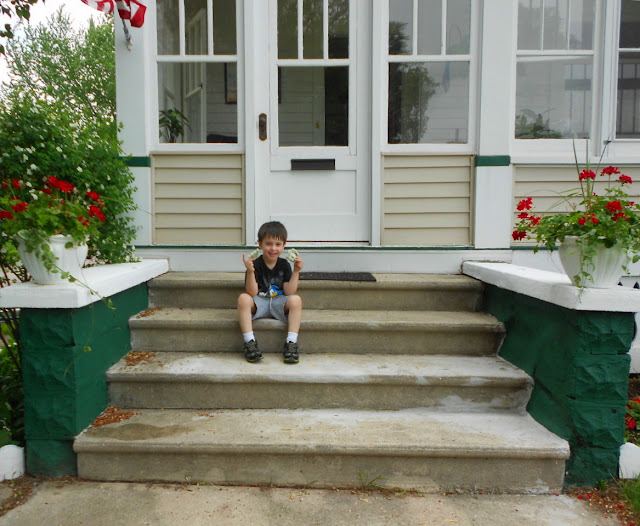 We walked down to the Farm and Home store in the next block.  He knows exactly where the Hot Wheels display of cars were, and we looked and looked for his choices.  Yes, he got the Lamborghini, but he had to settle for a Corvette instead of the Audi.  He confided in me that Corvettes are slower, his daddy said so.   LOL LOL 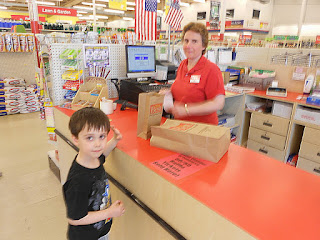 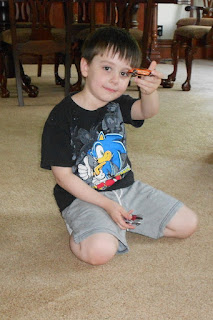 Always looking for jobs to do that are interesting, I asked him to help finish sorting the five drawers on the sewing cabinet.  The girls had started the button sorting, so Jameson helped to finish up.  We spent a long time talking and looking at the attachments.  It's pretty cool now that he is four years old, almost five and holds complete conversations. 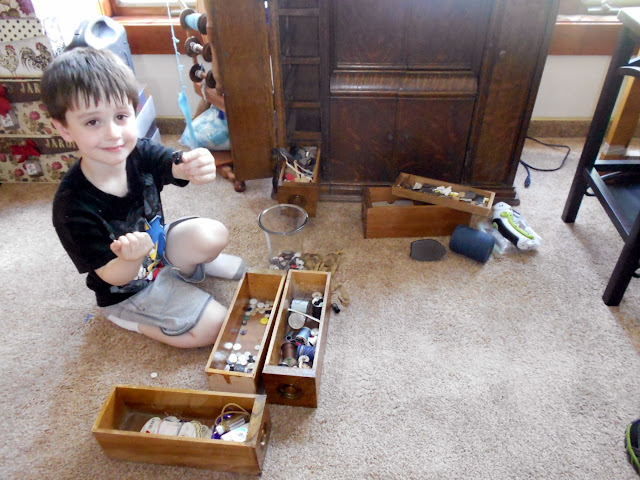 Jameson is a musician at heart.  He brought along his toy guitar and loves to play along with the radio. He most enjoys music by Queen!   Plus he has rhythm in his blood and sets up his "drums" with whatever he can find.  Granmuddah has a couple sets of drum sticks to play with  (I use them for something on my weaving tools)   and he is creative in finding things to drum on. 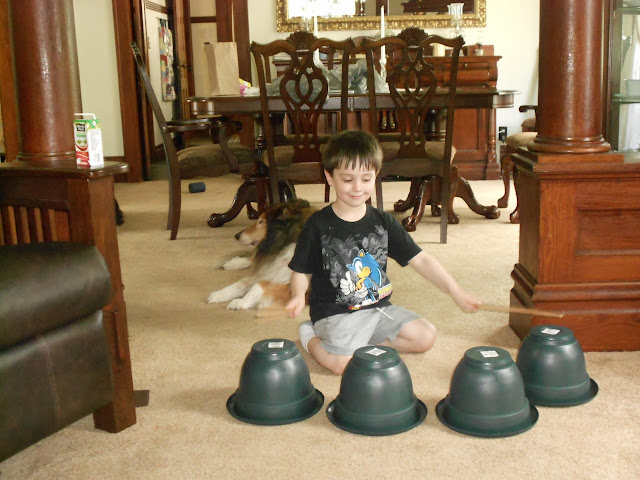 No matter what project I think of to do, he is right by my side like an eager puppy to work with me.  We turned the soil over in a long narrow bed alongside the south wall of the garage.  I had the big shovel and he had a small garden trowel.  I smiled and secretly snapped this pic when I saw him trying to shove down the little shovel with his foot, like I was doing on the big shovel!   Monkey See.. Monkey Do.

Later I took out a soccer ball and we played in the backyard for a while.  What grace! What form! 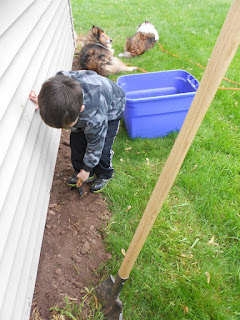 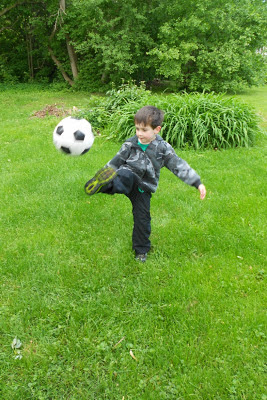 Jameson stayed till Sunday and Granfaddah came home from his fishing trip in the afternoon.  So he got to spend some time with him too.   Finally we brought him back to Green Bay...   and it was time to relax and enjoy the return of my fisherman!

Now this weekend it's Allegra and Mason's turn to come overnight.  Our son Dan and his wife Heather are celebrating their anniversary with a "We Still DO" party tonight.  We will attend and then take the wee ones home with us for an overnight, and the grownups can party late into the night.

(that is IF I feel better.. .so far this morning I have a sore throat, plugged ears, and thick head feeling--- perhaps from being out in the rain all morning Thursday shoveling and raking gravel?)


Posted by KarenInTheWoods at 8:50 AM