It looks like SPRING is finally here!!!   Our weekend weather was up in the 70's and we didn't have any plans to go anywhere.   Soooo of course, we worked on some house projects!

I will back up a bit leading to the weekend....

Thursday I had gone quilt shop hopping with two friends, Paula and Linda.  We also attended the warehouse sale for Nancy's Notions (a PBS quilting show)  in Beaver Dam.  Besides loading up on sewing stuff, I saw this fantastic pedestal fan in the clearance area of the sewing room stuff.    I loved it at first sight, and hoisted it up and over to the holding area until I was ready to check it out.  It was all metal and very heavy.  Here are us three, shopping till we were dropping! 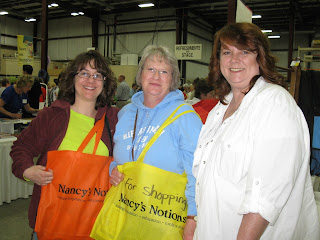 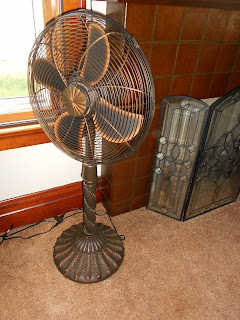 Part of the shopping marathon was to stop at various quilting stores around Wisconsin.  We hit some in Ripon, Oshkosh, and Appleton.  (plus stopping for lunch)   On Friday, I had one more shop to go to in Plymouth so they would stamp my "passport" for all 12 shops that I had gone to.  Then I am eligible for more prizes.   On the way back from Plymouth, I stopped at a rummage sale and saw these three pretty handpainted metal buckets.  I believe it's called "rosemalling".  They are stamped 1976 on the bottom and I have no idea how much later they were painted, but I really liked them.   I chose the creamy one as a trash can for in my Loom Room.

I bought it for a whole $2... but after getting it home, I was thinking about the other two buckets... and regretting that how I should have bought all three.  The rummage sale was 20 miles from home.  On Sunday, we got in the car and drove back down there.  The rummage sale sign was still out by the road for the rummage sale, but when we pulled in the barn yard, all the sheds and barn that had the sale stuff we closed.  I knocked on the door, but the people said they were not opening until 1pm.  I told them I just wanted the two buckets, but they said I had to come back at 1pm!   I said I drove 20 miles to get them.  No dice.... 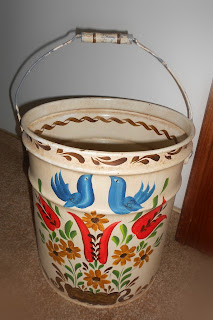 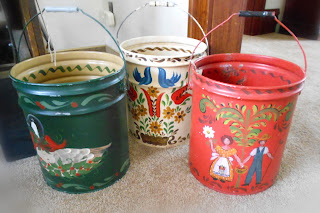 We went home and worked on some projects instead.  I figured I would just pass on the buckets and not drive another 40 miles round trip to get them.  About 2pm, Steve said we could go back and see.... and we did!   Can you imagine, 80 miles total from two different round trips to get some $2 buckets?????


But the nice part was ... on the way back home from the rummage sale, we stopped by a nursery.  Steve said he wanted to buy me a tree for an early Mother's Day present.  I could pick out whatever I wanted.  We walked around and found this wonderful "Weeping Cherry Tree" !!!   This is what it will look like when it's more mature in full bloom! 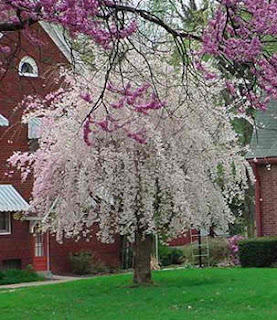 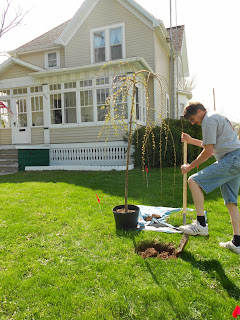 The tree is created by grafting on a weeping Japanese Higan cherry top onto a stronger sweet wild cherry rootstalk of a tree...   it needs to be trimmed back each spring of any sprouts that grow upwards and just leave the weeping branches that hang down.  It will be ready to bloom into full flowers in a week or so.  Some of the older ones at the nursery were already in bloom, but we bought a younger one to make transplanting it easier. It will bear ornamental fruit, but more to the liking of birds and not really edible like cherries we know. 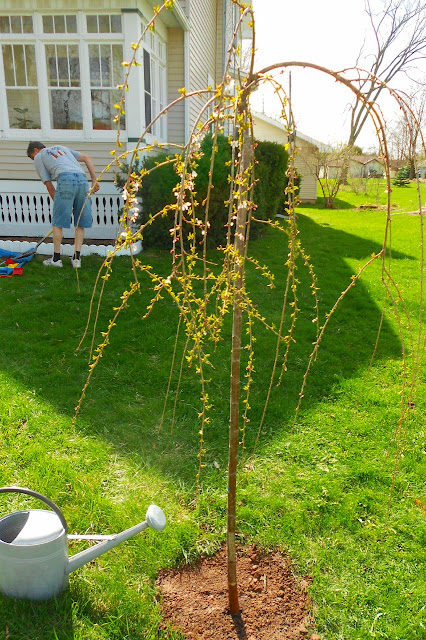 Last night I picked up four curved pieces of the same cement trim we put around the flower beds... and will stain them today to put around the base of the tree.   I like to make things match.  I know, kinda obsessive, but at $1.88 each piece, I can manage to add four more to the yard.

Our lawns are greening up nicely.. though the grass is not quite long enough to cut yet.  Steve has the mower tuned up and ready to cut as soon as it does though.  He actually seems anxious to get in some lawn cutting???

All alongside of the house I have wonderful bright colored tulips opening up... reds and yellows!  So pretty and springlike!   I spent a couple hours pulling out weeds around the tulips, and once they are done and spent, I will plant some of my coleus plants along the house where I am marking the empty spaces... so there won't be any tulip bulbs disturbed.   Then I will space some pots of white petunias in between on the areas setting where the tulip bulbs will be laying dormant till next spring.  I also did a little stencil paint job on my metal watering cans.... 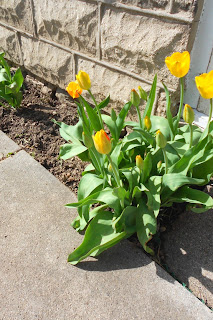 Saturday morning Steve rented a stump grinder to get rid of the three big tree stumps in the back yard.    He cut down the two big rotting trees last January before we moved the motorhome over to the yard.  A third tree had been cut down in the past but the large stump still remained.  He ground away at each of the stumps, section by section, and soon they were all gone--- reduced to a pile of sawdust.  He also did a stump for the neighbor lady, and also the three small ones up front where we cut out the overgrown cedars.   It's like a rototiller, but cuts with a big saw blade instead of rotating tines.


Yup.. that pile of sawdust WAS a big huge tree stump! 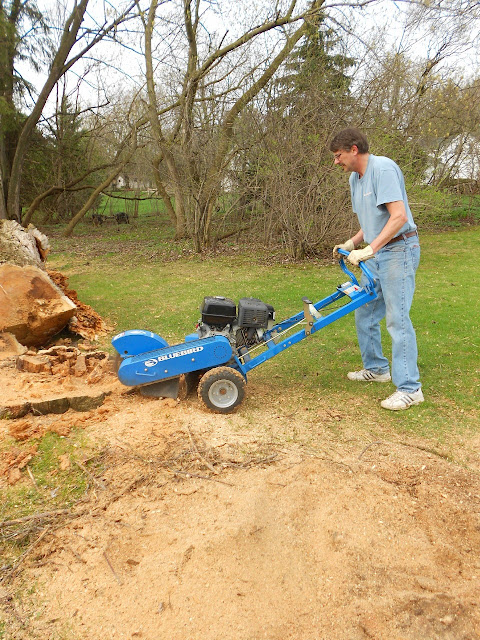 One day this week, the landscaper company is coming to level out the yard and lay a gravel parking pad for the motorhome.  The excess black dirt from the leveling we will have piled up on top of the sawdust piles leftover from the stumpgrinding.  I will make those into flower beds.  There are already some beds of perennials back there, like peonies, lilies and some kind of snow on the mountain variety.  I can split up some of those and move things around--- and maybe add some more?

It's still too early to plant flowers here yet, the danger of frost has not passed.  I have been carrying in and out my pots of coleus that I have been wintering over inside the house. They will harden off to get used to the spring temps after being in the warm sunny Loom Room all winter.

Steve also bought me a clematis vine to add to my pretty metal trellis he got me for Xmas out alongside the porch.  There are some clematis plants there already, so we will mix them with the new one and get a whole trellis full of blooms!


While I worked on some other yard projects, Steveio was cleaning and sorting stuff in his garage.  He is quite pleased with all of the space he has in there. It's extra deep so he can get things in and out of the workshop space to the left without having to move out the Tracker. Look how far the Tracker can pull forward in there! 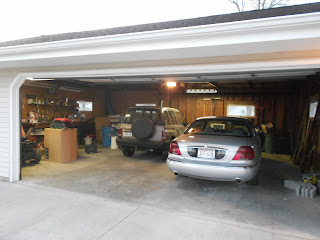 He has the peg boards arranged with tools and supplies, and he hauled a load to the city recycling area of things he didn't want around.  While he was gone, I touched up the back porch where I had been staining and added a new entry mat at the doorway to the kitchen...

Seeing as I had my solid colored green stain out and a brush already wet... I went to work on the sides of the front steps!  They had been plain grey concrete for 100 years.. and had some repair patching work done recently.  They looked splotchy and sad.  I spruced them up with new green solid colored stain (that won't chip or flake or peel like paint would)   and I spruced them up!   I added a little bit of green to the pillar blocks on the corners and on each side of the door... along with a little trim line along the porch between the siding and the cutout trellis work.  Now for a few pots of bright red geraniums??? 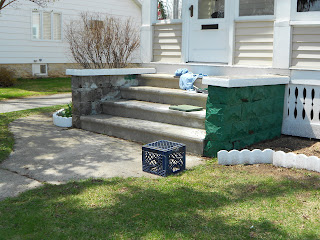 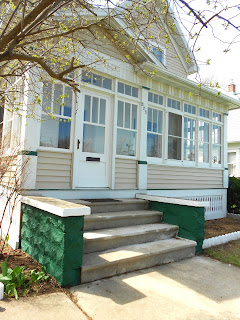 We got most of our stuff done on Saturday...  (and then spent Sunday running around buying stupid buckets)  but one other project I wanted to get tackled was the icemaker installation!

In our last home, we had an icemaker in the door of our fridge.  In our motorhome, we have an icemaker.  But in this house, the fridge that came with the home purchase didn't have one.  (I HATE FILLING TIPPY ICE CUBE TRAYS AND FINDING LEVEL SPOTS IN THE FREEZER)

We realized the Frigidaire fridge we have is already pre-wired and pre-cut with plugs covering the holes to add on an icemaker!  For $49 at Menards, this gal was gonna be made HAPPY!   We found the correct unit for our model and read the directions.  Between the two of us, we got it installed, tapped the fresh cold water line in the basement (no water softener taste for our drinking water at the sink or the icemaker).    The whole process took less than an hour.... 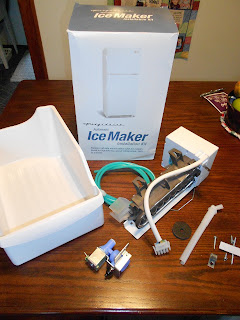 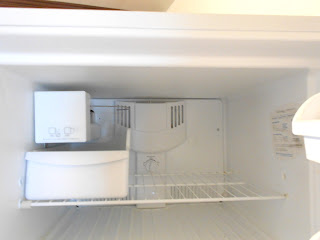 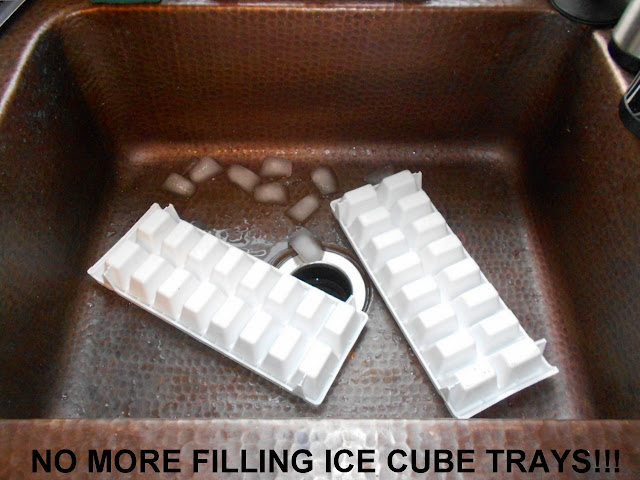 Posted by KarenInTheWoods at 9:53 AM