Last year when the covid pandemic was forcing our isolation and quarantine, a lot of our family gatherings crashed to a halt. Our youngest daughter Heather's birthday was the first family holiday in March 2020 to fall victim to the covid-19 pandemic. She really got ripped off last year for her birthday, and we could only order her presents and have them shipped to her house.

I told her that this year we would do a super wonderful birthday for her to make up for it.

Now with our vaccines and having our family gatherings deemed safe, we were able to plan a special day for Heather on Monday.

Just look at that happy face! It sure was worth it! 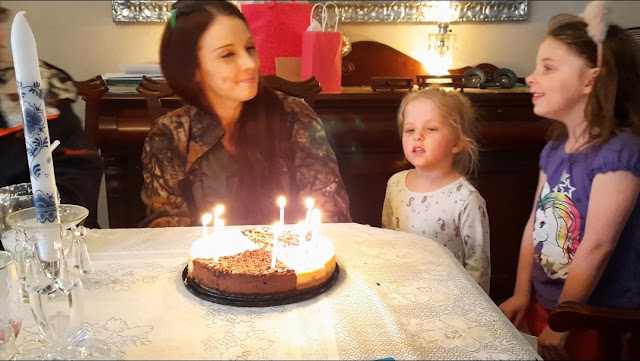 Yummmm a cheesecake birthday cake!
With a little preparation, Steve set up the big steamer kettle on the propane burner for snow crab legs and he got out his new grill to whip up some New York strip steaks. Even though it wasn't a sunny day, the temperatures were pretty warm so he was able to grill out in the backyard near the pergola by the She Shed. 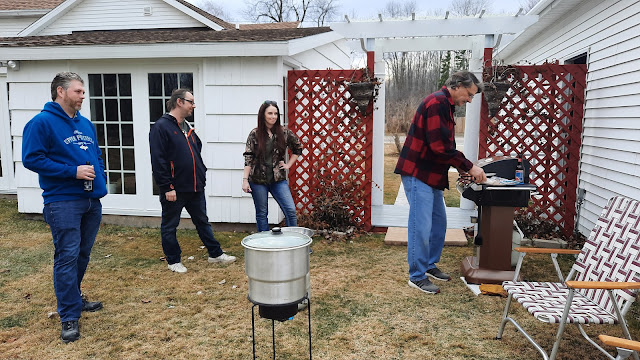 Of course the two sons-in-laws had to help supervise and christen Steve's new grill by opening a beer on the built-in bottle opening device!  He is pleased to say it works very well, and we even invested in a couple new grilling utensils to enhance his grilling experience. 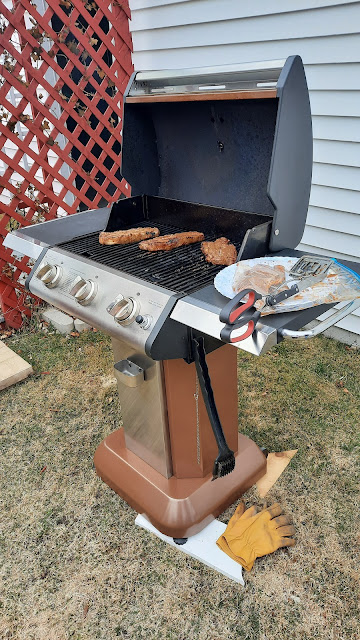 I bought the first watermelon of the season! They were rather pricey at $6.99 each but I felt it would be a good way to start off our outdoor family barbecuing fun by having a watermelon. It was a winner! Red and juicy and it had such a wonderful flavor--- 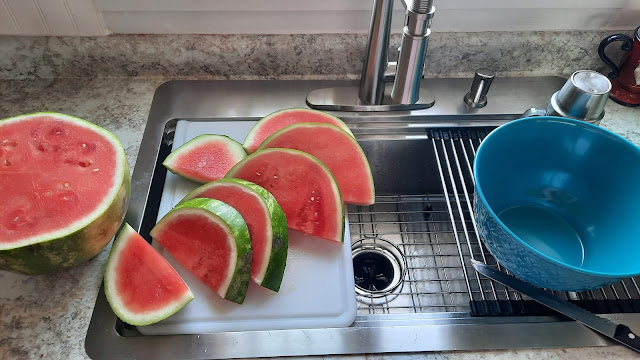 We laid out an array of foods and had everybody's favorites. Even though we had back up of hot dogs and tater tots for the younger kids, they even tried things like crab legs, calico beans, and salads and other good stuff. Clayton and the two youngest girls sat at the Kids Table, but Clayton kept coming over to steal crab legs from Grandma's plate!  LOL 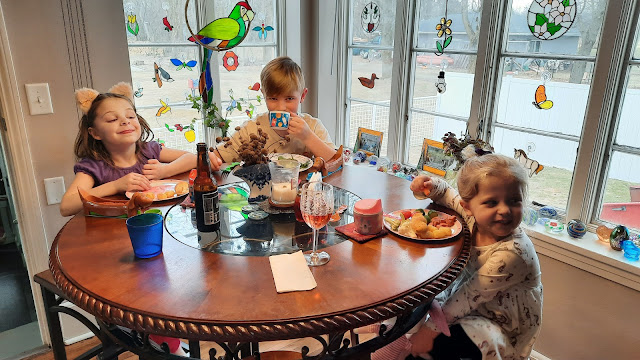 p.s. that is my wine glass, I set down to take the pic
The two oldest grandchildren now had the opportunity to sit at the Grown Up Table. I guess they graduated? Now that they eat grown up things like steak and crab legs, it's easier to have them sit close by with all of the adults. It was a wonderful meal with laughter and family fun and the joy of being together again.  It warmed my heart through and through. 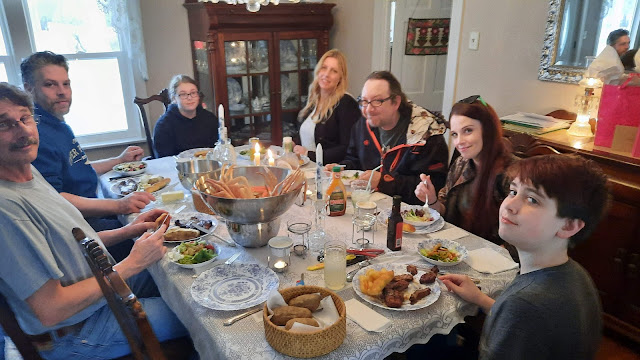 We had the kind of a celebration of being able to be a family again and not be spread out and isolated. There's been some sadness in the family as one of the son-in-law's, Jesse, recently lost both his father and his grandmother to covid. So two of our grandchildren are mourning the loss of their grandfather and great grandmother.  Life has been hard and we wish his side of the family the best in dealing with such a horrible pandemic and what it has cost in lives along the way.
After dinner, we decided to go outside for a while as the temperatures were still up in the 50s. After all of that food (and beverages and birthday cheesecake) it felt good to get out and go for a walk. The kids were playing in the big backyard and running around.  I decided to take a little stroll around our rural block, with all five of the grandkids. The back road that runs along our property is gravel and the side road is gravel too. But the city still decided they needed a street sign there for two gravel roads! LOL. It seems to be a little crooked, so the kids decided they were going to try to boost it back up right. They tried. 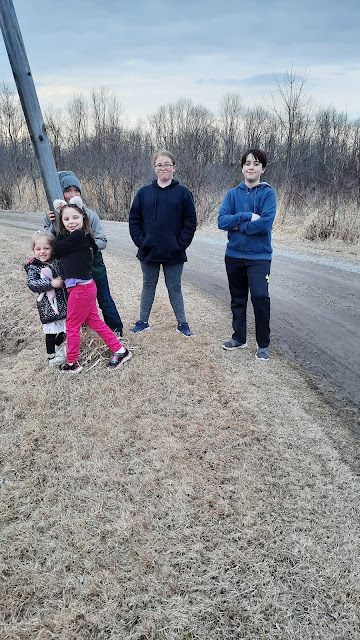 Claire and Whitney, the two youngest granddaughter's, are best buddies and they call themselves "sisters"! Here they are holding hands as we go for our walk. Totally cute!~  Whitney is the Kitty Girl and Claire is clutching her Bunny Friend. 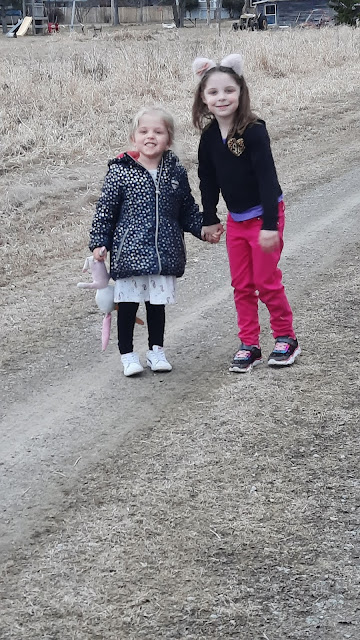 We hung out in the backyard for a while, just enjoying the nice weather. Even though it was cloudy and getting late and getting dark, the temperatures were still warm enough to sit outside and have another beverage or two. 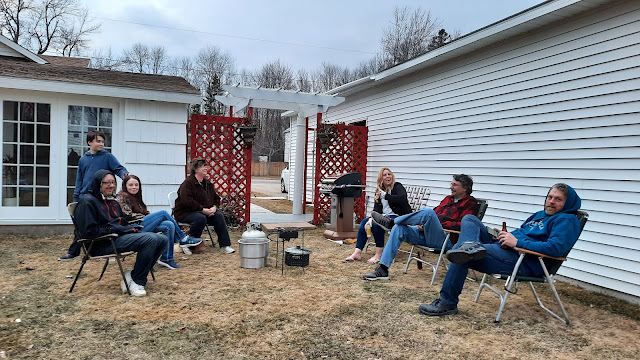 The grandkids always find something to play with---  they hauled out the little red Radio Flyer wagon. They decided to take the Birthday Girl for a ride!  Young Clayton tugged her along with a couple extra riders around the yard on the grass. He did pretty good for a young kid and he really pulled them hard. Later he showed us the red marks on his hands from pulling so hard. I'm so glad that they can have good clean outdoor fun and not just be indoors attached to electronics. 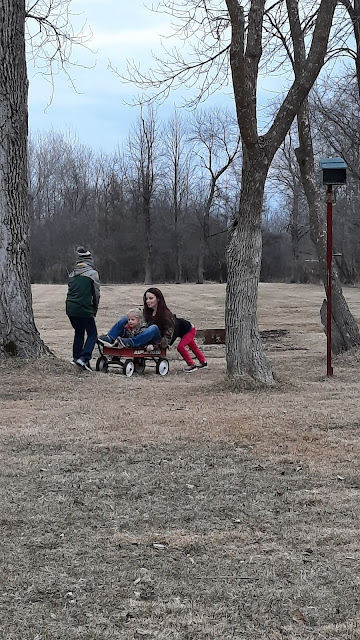 It was a wonderful day, but ended all too soon because kids had to get home to bed for school and the parents for work the next day.  I went to bed with a big smile on my face, for sure.
~~~~~~~
On to a few house projects:
For a while now, I have been thinking I would like to get a set of white cafe shutters or plantation shutters in the bathroom window. I had kind of been keeping an eye out for ordering two sets, one for the top and one for the bottom of the window so I could have the option of opening up one and not the other.
Egads!!!  We looked online and even the plastic faux wood ones were $100 a set. And I wanted two sets, one each for the top and bottom? The real wood ones were $150 a set, so that would be $300 to do the window the way I wanted!  Ouch!
But you know us, Steve was watching on Facebook Marketplace and found two sets the sizes we needed for a mere $25 total! They were already a creamy color and I had hoped they would match, but they did need a fresh coat of paint. Steve had to shave a mere quarter inch off each side to get them to fit perfectly.  After he did that, I started the first coat of paint today. I will give them a second coat tomorrow and we will get them mounted into place, 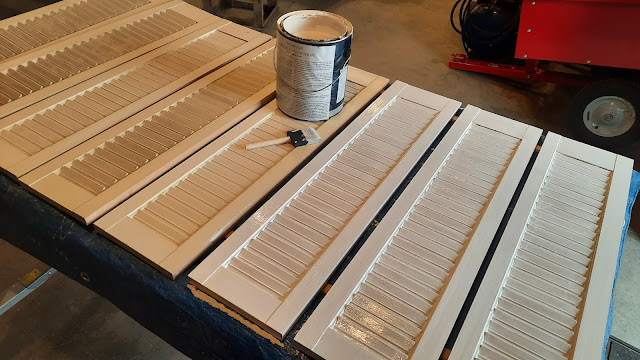 We got another cool toy in the mail today from Amazon. We've been talking for quite some time about this electronic device that operates by Wi-Fi and can turn your water main off in your house. Steve read about them, and researched until he found one we thought would work for our water main valve. 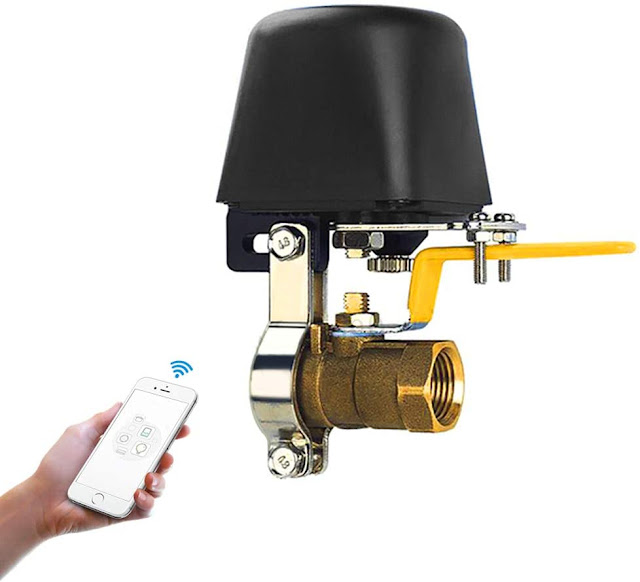 When we leave to go camping for a weekend or for a couple weeks at a time traveling, it's nice to turn the water off in case of any problems while we are gone.   We even turn off our ice maker on the fridge.
One time our daughter Heather and son-in-law Jesse had left their house and they had a complete flood when a fitting near a dishwasher failed, and their hardwood floors were completely flooded. They had to stay in a hotel for two weeks while the insurance company pulled up all of their vintage schoolhouse hardwood flooring, kiln dried it out, and reinstalled it all and restained and revarnished it. Not to mention the hassle of needing to live in a hotel room with two kids and two dogs and handle school, work, meals etc.  What a dilemma.
So....  these things can happen when you least expect them. We had talked about getting this type of a shut off device, and Steve found an interesting one on Amazon.
This may sound silly to most people with a regular basement and easy access to a water main valve.
But for us, it means going outside to the bulk head doors, then go into the newer side basement, then crawl through the "secret tunnel" as the grandkids call it, that is between the new basement and old basement to get over to where the water main is. 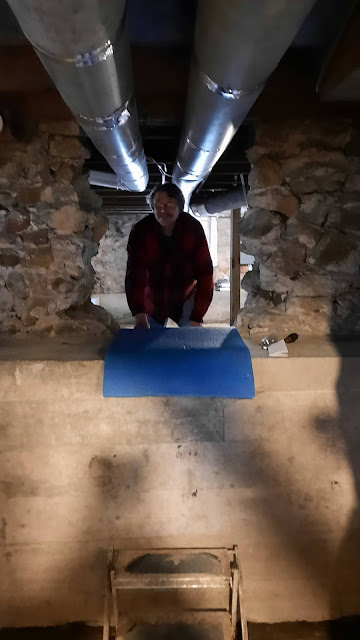 Here is Steve on the other side of the "secret tunnel". It's actually where the new portion of basement was built up against the older existing rubblestone basement and they knocked out a part of the wall to crawl through. So we go up on the little step stool, put our butt on the yoga mat, and swing our legs through to the other side. That's where we would have to go to shut off the water valve each time we leave or come back home on vacation. 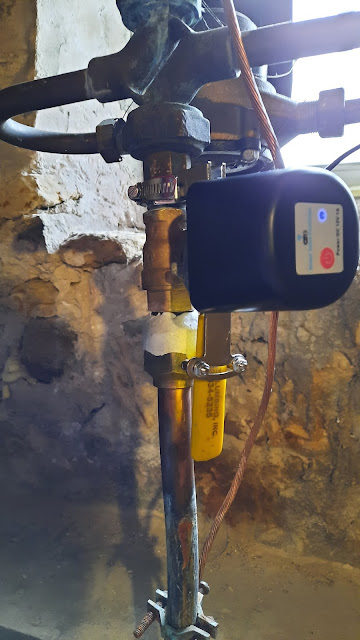 It installed very easily and it manually turns the lever from open to closed. It set up and we tested it out. Now with a flick of a button on my phone, I can shut our water off. We tested it two or three times, works great.  Problem solved and it makes life easier.
The other item Steve got today from Amazon is what I talked about in my last blog. It's called a mechanical plug. He was able to put it into that second mysterious opening in our basement floor that has been gushing water up into our basement and over to the sump pump hole.  It had an old rusty metal cap that let loose last week and the water kept flowing and flowing.  We're not sure if this was an old well or if there's an artesian spring underneath here, but it is now plugged off and it will dry up and be securely sealed again. Those were the toys that Steve ordered from Amazon. I ordered something from eBay for myself. Remember that screen door we picked up last week? Well I ordered four more curlicue brackets to dress it up like the other screen doors on our house. Actually, I ordered a set of 8 brackets and split it with my neighbor across the street. She wanted four of them to dress up her screen door too.
I started giving them their first coat of primer / paint because it's warm enough in the garage to do a little painting today.  I love doing piddly little painting projects like this.  Must run in the family, my 82 year old mom in Florida has been painting her porch deck and railings bit by bit, a few each day. 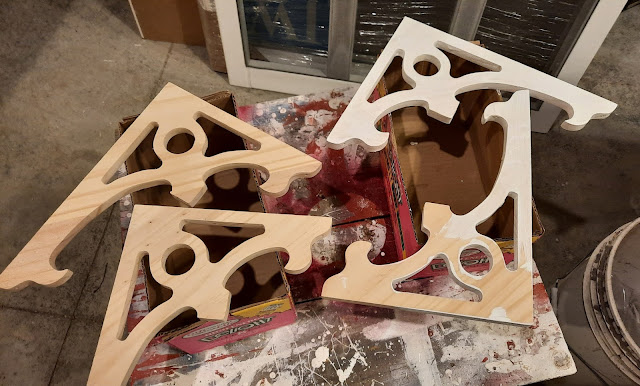 Once I get two coats on them, Steve will drill the tiny holes and we can secure them to this screen door to dress it up.  It is going on the side of the She Shed that leads to the pergola and garage and yard.

Oh, the other day, we finished digging the rest of the paving stones and laying them flat.  After a few weeks, we will brush the polymeric sand in the cracks and lightly use a hose to activate the sand. Then hopefully no weeds will grow up between the blocks. 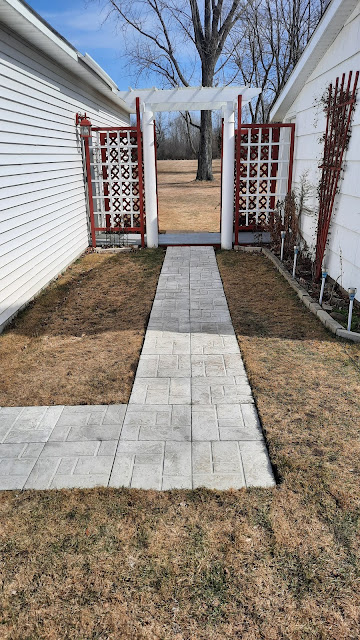 The weather here has taken a turn and is now going to be rainy for the next 3 or 4 days.  I think I'm going to get more sewn on my quilt.

Posted by KarenInTheWoods at 8:02 PM