We Want To Feel a Little Drafty?

The attic area of our home needs additional ventilation. There are regular roof vents near the top that were installed during the roofing replacement a few years ago by the previous owners.  But Steve has noticed when working up there doing the electrical rewiring, that there is not sufficient ventilation. There is a buildup of moisture and dampness on the batt insulation.  We will be removing the old shrinking batt insulation soon and replacing with blown in cellulose.  So doing the proper ventilation is a good idea now, before we start that next step.

Although the top plastic roof vents are good, they do not allow adequate air flow, especially during the very hot summer months. There's absolutely no ventilation around the bottom soffit or eaves.

Steve has decided that it's best to take care of this situation while it's still cooler out, before the hot sunshine and summer months are upon us.

We are having a stretch of 40+ degree days and the snow is melting fast. With the sun shining on the east and south sides of the house, he decided this would be a good time to work on this project.

With that in mind, we were in The ReStore and noticed a box full of the exact type of soffit vents he needed. They were brand new for the bargain price of $0.50 each! In the big box home improvement stores, they run between $3 and $4 each. He snapped up 10 of them toot sweet and took them home.

After measuring, I helped him figure out how to evenly space five of the vents in the soffits all the way down the east side of the house, and the other five along the south side.

During the sunshine yesterday morning, he hauled out the tall extension ladder and set it up along the east side of the house.  With snow still on the frozen ground, it was a firm footing underneath. That was kind of nice that the ladder was not sliding or sinking into the ground the way it would during spring time in the muddy ground.

For the first step, Steve had to cut pilot holes into the wooden soffits. Using a big drill with a hole bit worked great to make the pilot holes. 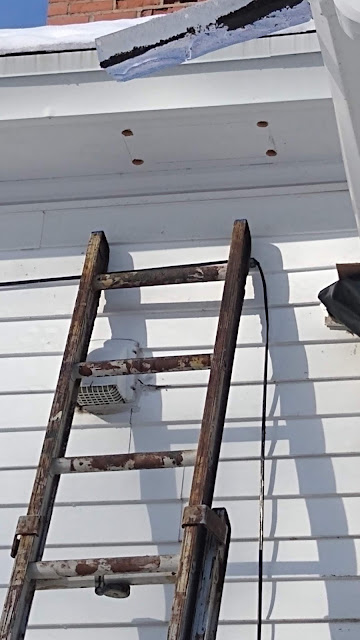 Next he used the jigsaw to cut out the rectangular spaces. He immediately felt an influx of air whooshing past him as he cut the rectangular holes. It was now creating a "chimney effect" for the proper air flow to get into the attic space.

Here he is standing on the roof
of the outdoor access to the basement. 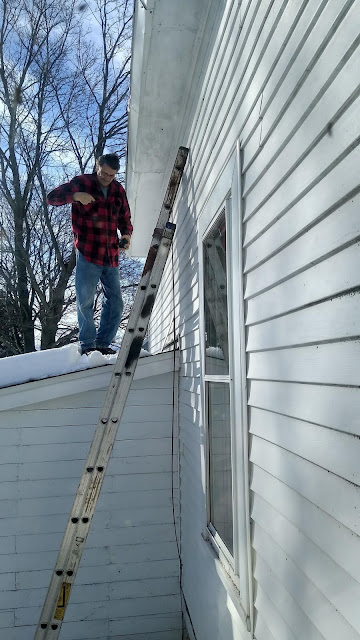 The vents were already painted white, but the screws he wanted to use were dark. So he stuck a whole bunch of screws, heads up and tips down, into a block of styrofoam so they were all standing upright. Then with a quick spritz spritz spritz of a can of white Rust-Oleum spray paint, the heads of the screws were now white to match the grids.

In no time he had the holes made and was screwing in rectangular vents along the east side of the house. 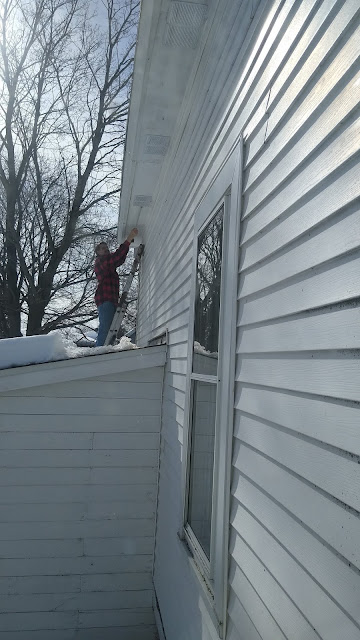 He took a little break for lunch and then decided to go out and attack the south side of the house next. The sun was shining brightly on the house and reflecting back onto him from the warm white wooden surface. He was quite warm and switched from a winter jacket over to a long sleeve t-shirt and a thick flannel shirt. 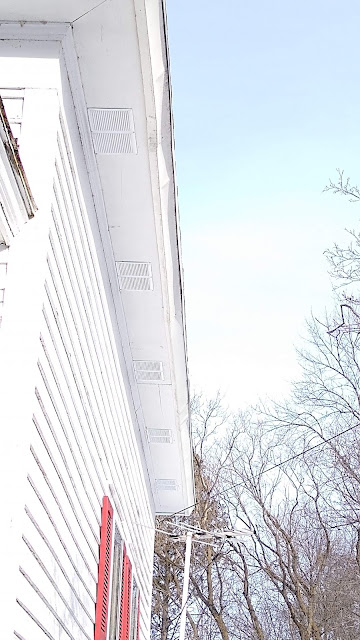 Once he was done, he was hot and sweaty and needed to hop into the shower.

He will do a few more vents on the front of the house facing west, once the snow melts off the metal front porch roof ---- so he gets better access without danger of slipping off the metal surface.

I wrote in my last blog about the visit from our grandson Clayton...

On another day, it was his older sister Chelsea's turn to come. She was excited to learn something new. With her birthday money, she had bought some nice thick yarn. She was wanting to learn to knit. She already knows how to crochet. It was time to expand her "yarn skills knowledge".

Honestly, 10 years ago I showed her how to knit. But for some reason she didn't quite remember learning it way back then! Lol!!! 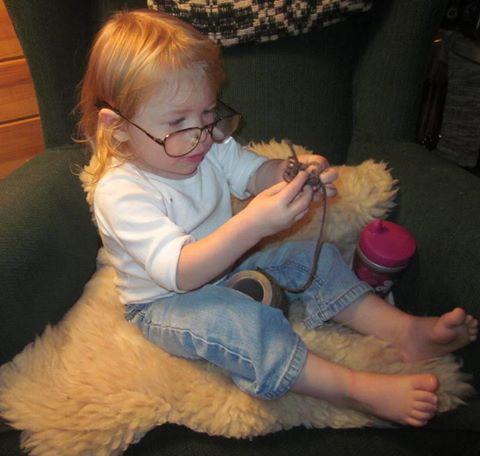 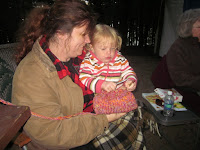 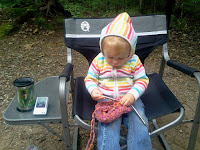 We spent a delightful afternoon on the couch, knitting hats on circular needles. She picked it up right away and was able to get quite a bit knit before it was time to have supper. 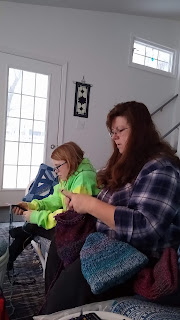 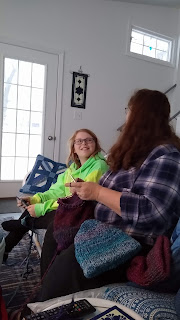 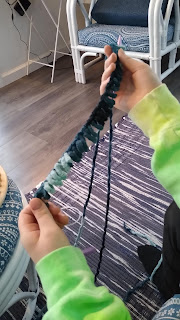 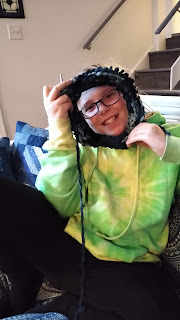 It was time for dinner, and the grandkids always love selecting the menu.  She helped to make a meal of pasta with meatballs, garden salads, and baking garlic knot rolls in the oven.  She set the diningroom table and had to light the candles too. 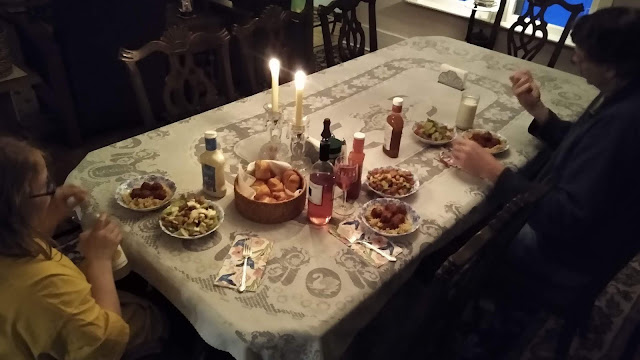 They mostly love putting out the candle flames with the "snuffer"....
Our girls loved to do that when they were growing up too. 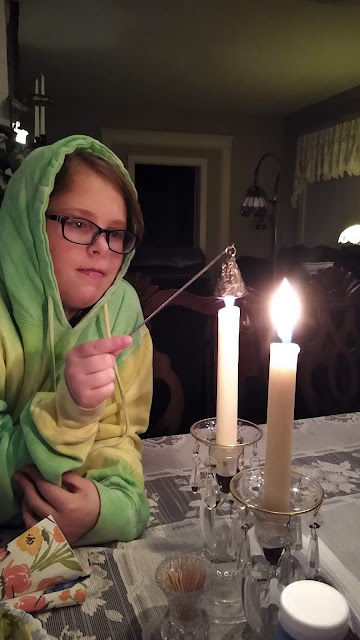 I love it when each of the grandkids can come over one by one and spend special time with us. Hope to have all of them at one time or another to come and do these times of sharing and learning.

Now for a funny doggy story:

I knew of a woman from Florida, named Julie, who has two sheltie dogs.  We never met in person, but we know a few people in common because she grew up in our small town.

She was coming up to visit her parents, and brought her shelties along in the car.  The youngest dog had never seen snow, and remember, they are used to grass and sunshiney Florida weather for doing their "bathroom business".

After a long day of driving the last leg of her trip, Julie had now encountered SNOW.... and her two little shelties refused to do their thing at any stop once the snow appeared on the ground as she journeyed north.

Poor little Jamie and McKenna we're having a tough time adjusting from Florida grass and sunshine over to snow for doing their "bathroom business". To the utter frustration of their owner, who finally arrived at her parents in our town, neither dog would go.  In desperation, after three tries at her parents house, I suggested that she bring the dogs to my house. We would see if they will do their business out in our fenced-in yard with the scents and smells of where our dogs go.

The dogs were finally able to relieve themselves after an 10+ hour stretch on the road from Nashville to Wisconsin.  The only problem was, after she returned to her parents home for a good night's sleep, the next morning, neither dog would go out in the yard at her parents house! Not in the yard, not in the plowed out drive, not in the side yard.... nothing. She walked them up and down and up and down the road without any success.

So what does a desperate doggy owner do? Contact me back and asked if she can drive over to my house and let her dogs go potty in my yard again!!! Lol!

It worked, of course. So for the first two days of their visit here from Florida, little Jamie and McKenna were getting driven across town in the car.  Hopping out and coming to do their business here in our yard. Each time it worked, but they still refused to do it over at the Julie's parents yard.  Of course, each time it was FUN here to play with Finney and Binney.

At the end of the second day, Julie came up with an idea. She asked if she could bring over a bucket and scoop up the yellow snow and bathroom remains in our yard and bring it over to sprinkle and her parents yard???

That did the trick!!

By the third day, the dogs finally got the idea that the snow was not the enemy to do their bathroom procedures. Actually, Jamie was starting to enjoy the snow, lay down in it, and even eat it---- (but not the yellow stuff)

I'm happy to report that for the rest of their visit, Jamie and McKenna are now able to use the bathroom facilities over there and not have to be transported across town over to our house each time to do their business.

It was so nice and warm out that both of our doggies needed to get a bath. I worry about sending them out for potty breaks if their fur is damp and they would get a chill. Since the sun was shining, I decided it would be a good time to get some baths done. With their thick fur, it takes them a good twenty-four hours to be fully dry. So it was just quick out-and-back-in for potty breaks to avoid any chill.

Yesterday was a good day to brush them out. Binney absolutely adores getting brushed. She lays back on the little bench and literally falls asleep. I am not kidding! 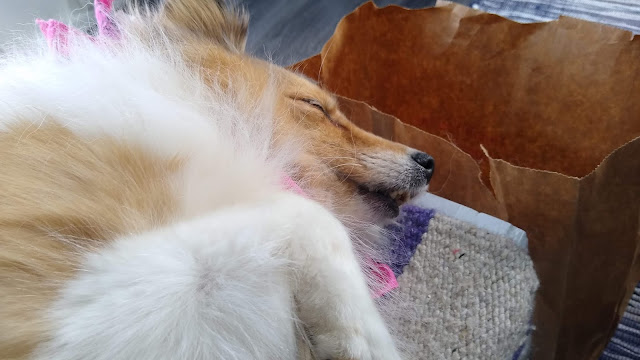 The more that I brush her, the more she loves it. She gets so relaxed.  She would fall backwards off this bench if I didn't keep her centered. 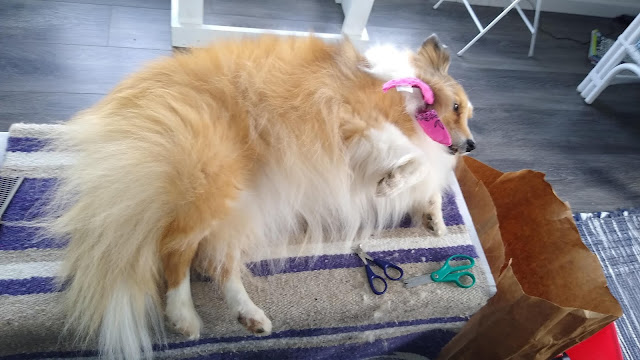 Finnegan, on the other hand, is so ridiculously apprehensive and hates getting brushed. We treat them both the same, and we use the same brushes. I cajole and compliment and soothe his fears. But he just does not like it. The sooner we're done with him the better. Both dogs get pedicures and look spiffy and pretty when they were done. 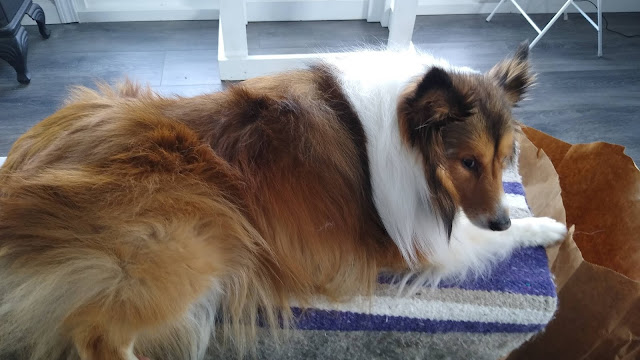 It was good to get spiffed up because they were having company yesterday evening! Their two Florida doggie friends, Jamie and McKenna, came to visit.  They brought us some treats and a wonderful gift certificate to a beloved local restaurant as a "Thank You" for using our yard's bathroom facilities. hahahaha 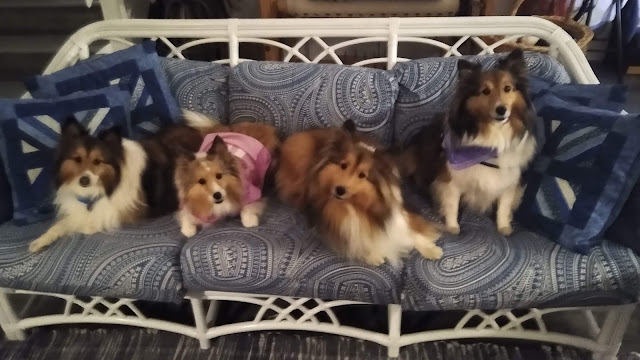 The dogs engaged in a rousing game of "Doggie Football" and had a blast. McKenna gave up and hid behind the chair. They all slept well and it wore them out.

Not sure what we are doing today...
we will see what the day brings!

Posted by KarenInTheWoods at 10:44 AM