I'm All Steamed Up and Steve is Sucking Up

Catchy title, eh? But it's not what you think...

This big beautiful farmhouse kitchen has a suspended stainless steel hood vent over the range in the island.  The vent portions operates, but I noticed that a lot of the cooking steam does not get sucked up through the vent. It doesn't seem to be that powerful? It sounds like it, and it has four different speeds. But it just doesn't seem to move the steam.

Also, once in a while, during very cold weather, it will drip condensation from somewhere in the vent pipe, back down onto the stove. The first few times we saw moisture dripping on the glass cooking surface, we were worried about a roof leak somewhere above.

Steve crawled up through the scuttle hole into the attic to investigate. It turns out it was incorrectly installed with an un-insulated metal vent pipe connected to some white vinyl vent hose. Nor was it routed directly in a straight line. The pieced together installation had some dips and bends to it.

Since Steve was up in the attic working on the electrical wiring, it was the perfect time to replace the venting with the proper type of insulated pipe and configuration.

Because I wasn't up there while he was doing it, I have no photos of the process.

First, he did make sure that there was a flapper at the termination vent to the outdoors --- meant to prevent cold air from back drafting down the pipe. That part was good.

Next, he removed the previous configuration and installed proper insulated 6-inch venting and secured it in a straight direct line to the outside vent grid.

Inside, it was like night and day! All of the steam now goes directly up the vent through the grids and outside. It seems to have much more volume and flow. 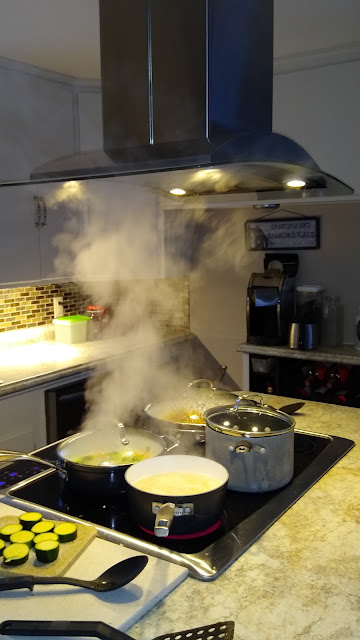 Just look at all of this steam
from dinner this evening.
It's all going straight up through the filters
and out of the house. 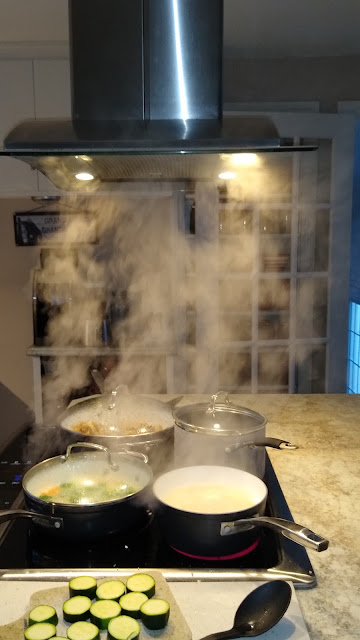 Steve went outside and watched the steamy vapors come rolling on out of the vent grid on the back gable end of the house.

What a guy! He routed it up and out the right way that it needed to go. Thanks Steve, you are a good suck up!

Tonight I was cooking up chicken stir fry. I like to cook it in separate pans so the flavors stay separated. Then I cook up more than enough so we can package up the additional food separately to freeze. I make enough for three meals during one event of preparation and cooking. 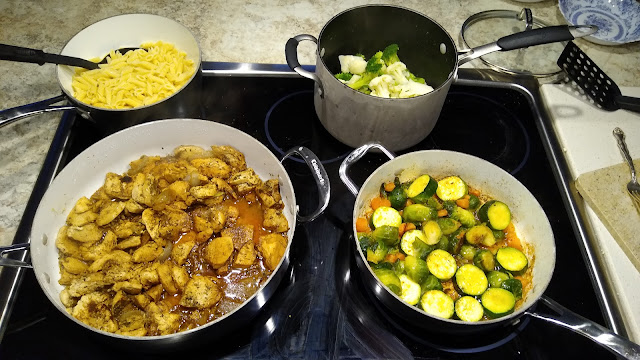 In the big skillet on the lower left is thinly sliced chicken breast, sliced onions and minced garlic slowly sauteed with olive oil and some dollops of Andria's steak seasoning sauce.

The upper left is the saucepan with mini penne noodles. Sometimes I do rice, other times we like our stir-fry over pasta.

The upper-right is steamed cauliflower and broccoli that I like to only steam part way, so it's still crunchy and crisp. If I put them in with the rest of the vegetables they get too mushy.

The bottom-right smaller skillet is halved brussel sprouts and carrots slices steamed for a little while. Then I pour off the water and add olive oil, butter and seasoning to caramelize the cut flat surfaces of the brussel sprouts as well as the slices of carrots. Right before they are done I add thick slices of zucchini because those take the least amount of time to cook.

By then, everything is done. We pile our choices of the foods, in the amounts that we like, into our own bowls. 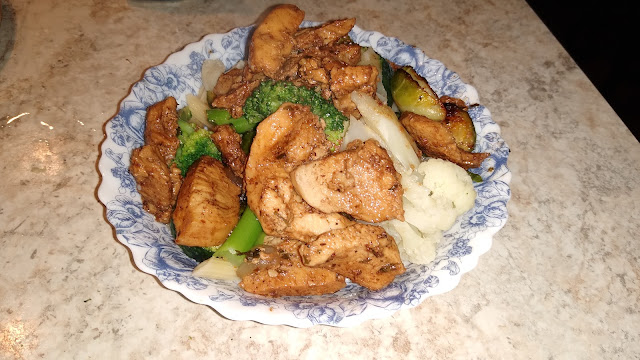 The leftovers are already separated and ready to be frozen individually for two more meals.

Steve also was working today at mounting our light fixtures back up on the ceilings in both of the bedrooms. Now that it is all new wiring, the light fixtures are ready to be mounted into the new ceiling boxes, safe and secure.

These light fixtures are really special to me and we brought them along from the house we sold in Chilton. If you remember, we quickly went out and bought some other light fixtures to put up in their place before we put the house on the market. Because the very moment you put on the listing paper that the lights are not included, the buyers of course are going to insist that they want them included in the sale! 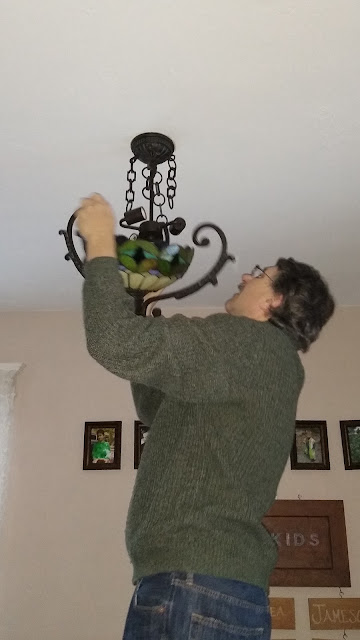 I originally found the 2 frameworks of these fixtures in Goodwill for $4.99 each. Then we added the 2 stained glass shades that I had bought at Menards for $7.99 as replacements on a very good sale. 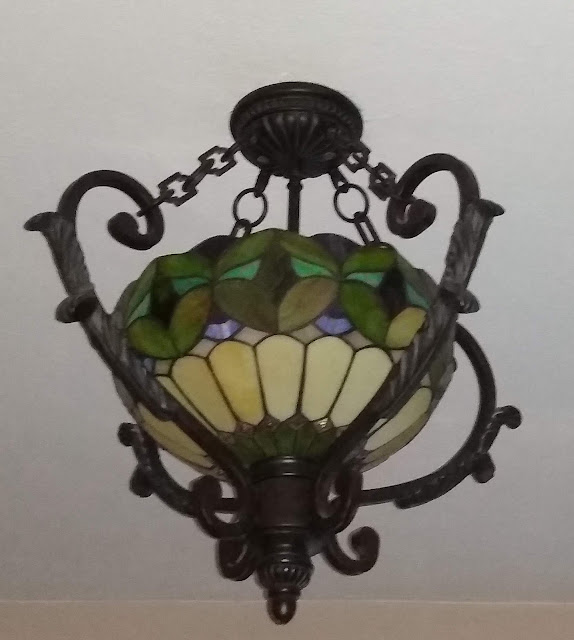 I really like them and they match the stained glass lamps on each side of the bed, as well as the lamps in the living room, the hanging light fixture over the kitchen table, and the 3 wall sconces down in the she shed!

Hey, they say surround yourself with things that give you "Joy"... These light fixtures sure give me joy.  Especially this one in the grandkids bedroom, waiting for the wee ones to come for sleepovers and playtime! 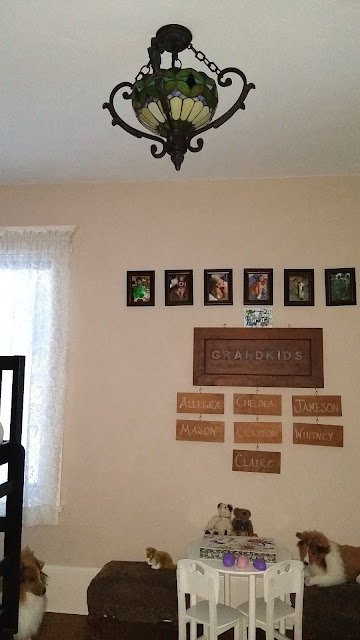 We are facing some really cold temperatures here around the Great Lakes Region. Tonight the temps are going to drop to about 10 below zero, and then add in the brisk winds it will probably be in the 30 to 35 below zero range.

I think that it's a good time to stay inside this evening, curl up by the fire, and do some weaving.

I am just getting the rags wound on to the shuttles for my next rug. This one's going to be in a variety of blues and whites in my favorite hit and miss pattern. 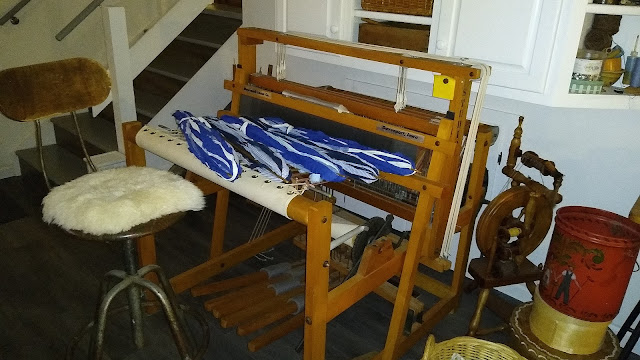 I guess I better get started.

Posted by KarenInTheWoods at 7:05 PM