Our middle grandson, Mason, needed a babysitter to pick him up from his pre-kindergarten class and hang out with him until daddy gets home around 3 pm.  His normal babysitter, Auntie Kimmy, had back surgery and was not able to do it for a few weeks.  With some careful scheduling, his mommy arranged for a few of us grandmothers, aunties and friends to help out.

I get four days of the calendar to spend with my little guy, picking him up from his pre K school .... 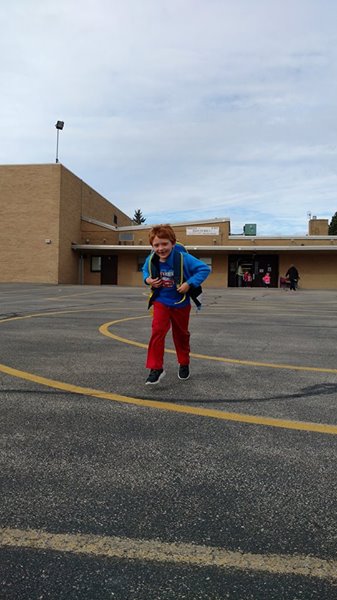 (2 times he rushed out so fast to see me
that he even put on his jacket inside out!)


Each day we chose a place to eat out for lunch. It was his idea. So far we have had McDonalds, Subway and Taco Bell.  Yummmmy (not) 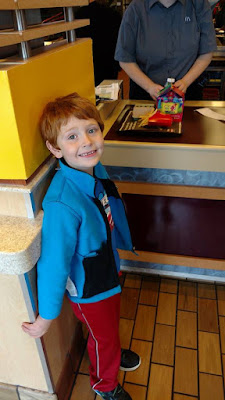 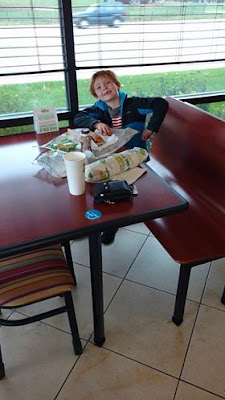 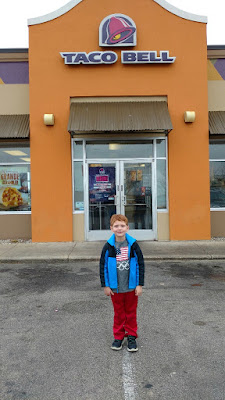 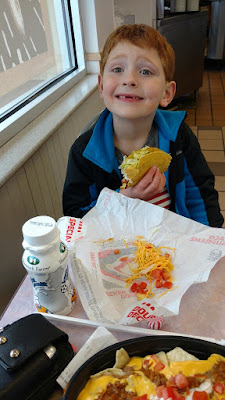 For an interesting afternoon activity I decided that each day little Mason hung out with me, we would cook his family a supper to come home to. His sister Allegra is in school until 3, his daddy picks her up and comes home to relieve the babysitter, and his mom works till much later at the bank.  It might be nice to come home to a prepared meal, all done by the hands of a four year old!

The first day we did PIZZA!   We went to the store and shopped for all the ingredients. I even let him pay the cashier and help carry out the bags to the car. He carried them into the house and helped put all of the ingredients in a row. 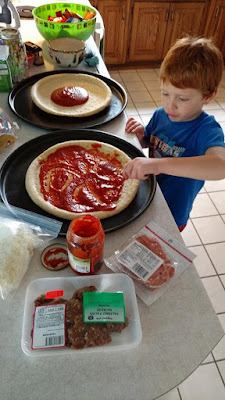 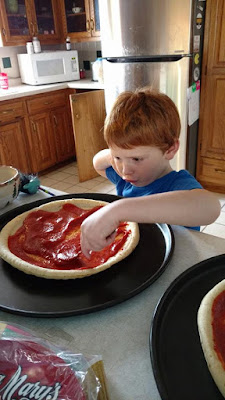 We cheated a bit with pre-made crusts and canned pizza sauce.... but he arranged all the pepperoni on one and the sausage meat on the other.  He said that he liked sprinkling on the cheese the best! 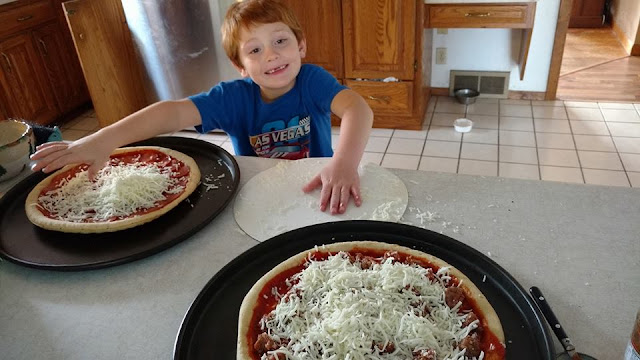 The next planned babysitting day that we met up,
little guy Chef Mason made
BAH ZAH NAH
(his word, not mine)

Here is the recipe:
(I helped him with the writing) 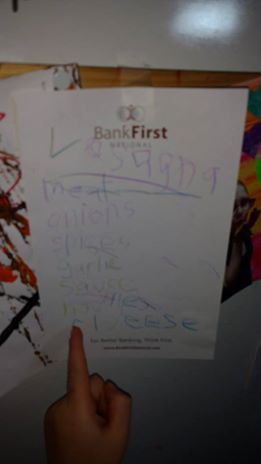 We worked on the sauce and he helped with browning up the hamburger. He stirred in the spices too.  When it was time for boiling the noodles, this grandma took over.  Once the noodles were cooled, he was able to help construct the pans of the Italian Dinner he was painstakingly working on. 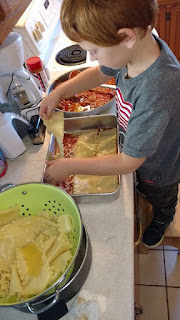 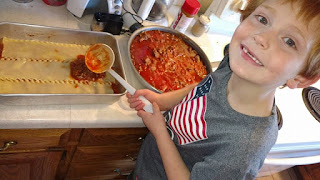 He was pretty happy to have MORE cheese to spread!
Then he prepared garlic bread to be baked later by his parents. 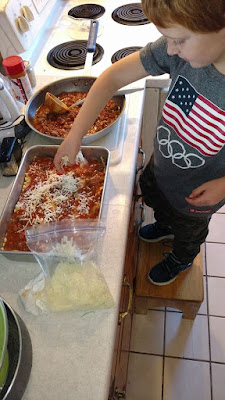 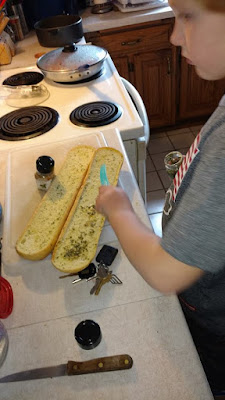 What a great chef.
Plus he made an extra pan for me to take home...
Grandpa and I had dinner made by Chef Mason too~! 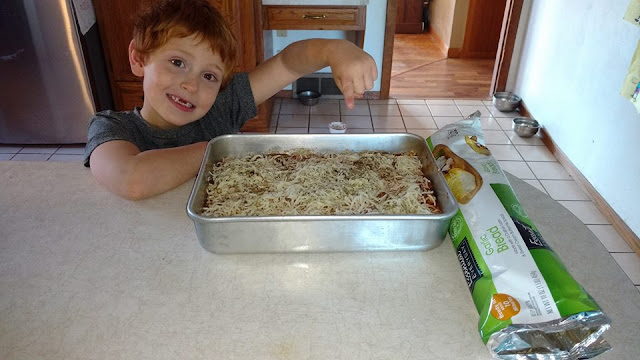 Yesterday we worked on Chicken Veggie Soup....  he insisted we needed to make a recipe again. (I helped with his letters, but he is learning) 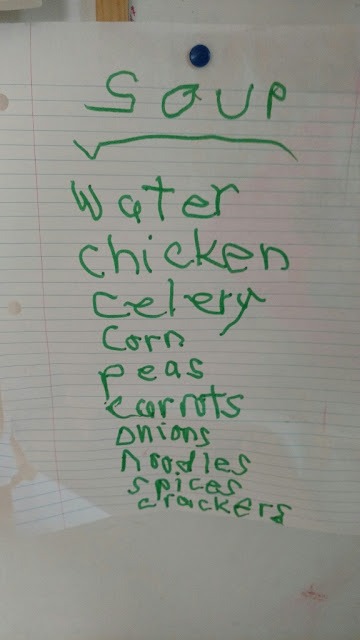 He learned to carefully chop up veggies with a dull knife, and put them into the cold water in the pot. He filled the pot up so full we did not have room for any noodles. We set it to simmer all afternoon while we played with toys and games.   I told his daddy they had to cook the noodles up separately and add them to the bowl as they scooped up the soup.  They are the fun bow tie noodles that kids like to eat.  We bought a bag of oyster crackers to serve with the soup. 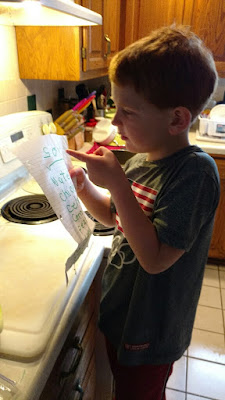 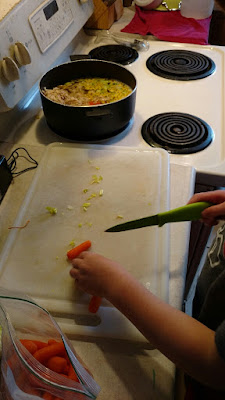 He was so excited to make what is Grandpa's favorite thing to make. He said he is ''Just Like Grandpa'' now. 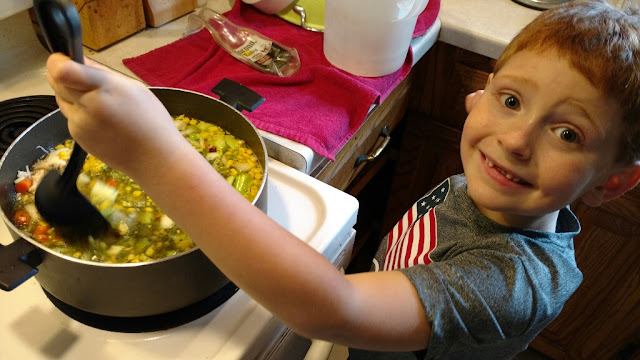 Tomorrow I go back again, and I think we are going to try his daddy's favorite food: Scalloped Potatoes and Ham.  I am thinking we can even manage to make a pan of rice krispie bars with chocolate chips.  That is Mason's request of a thing to make.


We had a lot of fun... not just cooking, but being silly together.  Yesterday we had some awesome battles playing volleyball with a balloon in the house.  He won three times and really wore this grandma out.  LOL

We got in some leaf-raking.... and shopping....  he loves the AutoTrader freebie magazines in the lobby at the grocery store.  This kept him busy while I drove, and he chose what kind of cars he wanted to buy. That was one of our oldest grandson Jameson's favorite thing to look at. Little boys dreaming of cool cars, and being able to have a free book full of them to oogle over. How cool is that? 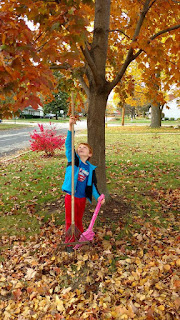 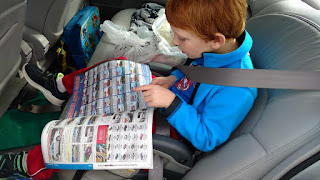 When getting supplies at the local grocery store,
they have this fun shopping cart for kids! 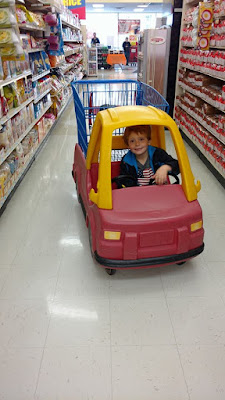 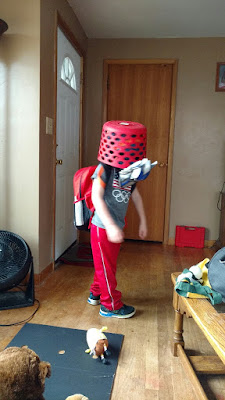 The creative play of a ''fire chief'' on the job
with his helmet and fire-fighting gear.

While out in the yard raking leaves, we had a fun discussion
about mayors in town making rules about where to put your leaves.
He liked the idea of the mayor being the boss.  LOL 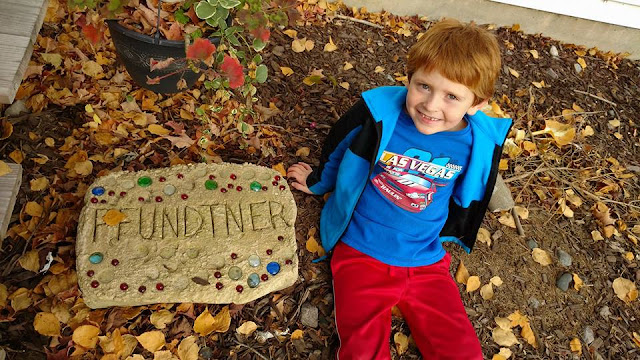 I am thankful to spend some one on one time with each of my grandchildren. Each one is unique and interesting and funny.  I cherish these days, because soon they grow up too old to want to hang out with Grandma and Grandpa. Their innocence and excitement over the littlest things is refreshing and precious.

Stay tuned to our next adventure.....

Posted by KarenInTheWoods at 7:50 AM