We got the call on Thursday that our newly found semi mechanic had gotten in the ordered ends for the hoses on our AC compressor unit.  He came recommended to us by the faithful parts guy at a local business.  When Steve talked to him on the phone, Chris Fritsch really seemed to know his stuff, and was willing to do the job for us when the new parts came in. Steve had previously drove out and met up with him and he knew what to do for the job, and understood the job we were asking about.

(remember, in my part one blog, we had to cut the lines on the old AC compressor to get it off because the fittings were rusted so tight they broke)

Thursday night, as soon as Steve was done with work, we brought the motorhome out to his country location. I followed in the car so we could leave the motorhome there. We backed it into the drive at the shop next to his home.  Imagine my delight when I saw some fiber angora goats, fleece sheep, angora bunnies etc.   While the guys gabbed, I eyeballed the neatly shorn sheep and realized I was at the home of a Fiber Person!   (more on that later)

Chris and Steve got the main ideas taken care of, such as where the engine access from inside was available, (our huge king bed lifts up for more room for repairs than most motorhomes)  and where the controls were inside for the jacks and how to get in the front compartment by the freon fill fittings etc.

Then his wife came out and we chatted... she is a registered award winning angora fiber grower and is also a spinner and a weaver!  She is currently restoring a loom and has another big ole barn loom in storage.  We gabbed on and on about fibers, tools, fun fun fun stuff!
Amanda Fritsch website
Dolly Rock Farm and Fiber
www.angorafiber.com

The guys finished up their business so we hopped in the car and left our rig in their care.  We do not often do that, but felt confident that his rural location it was fine.  Plus they have a massive doberman protecting the yard and a big Great Pyrenees dog out in the shop.

Friday evening Chris called and had already flushed the lines out, pressurized them to check for leaks, then evacuated the AC system and refilled with new freon.  While he was doing that, he noticed our passenger side rear hub was leaking... the seal was bad!   We had redone the drivers side 2 years ago, so having the passenger side go bad now was no surprise to us.  Thankfully, he had time to repair that for us too!   We are glad he noticed it for us and it was not in any way to pad the bill.  We had our own choice to take it as it was and get it fixed elsewhere.  Steve asked if he had time, and he was able to locate the seal part and get it done by later Saturday morning!

We drove on out to pick up the rig on Saturday.... once we started gabbing, it was non stop for about two hours!  The guys gabbed about diesel engines and the repairs and all that stuff... 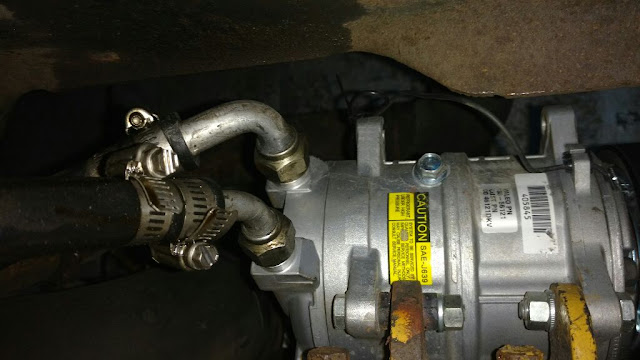 We gals gabbed about fibers, tools, dogs and even her parents are full time RVers!   They themselves would like to go full time someday, and right now they do go camping with a travel trailer.  But owning a second farm with donkeys and all her fiber animals would be a bit of a stretch to live full time in an RV?   hahhaaa  She talked about pulling a trailer full of registered award winning fiber angora bunnies behind a rig on the road?  LOL

Amanda and I have exchanged ideas, photos, and information on weaving and fiber stuff.  We are now Facebook Friends!  My oh my how cool to find a fibery person so close by who is also restoring a loom.  My friend Juanita has more information about the particular Kessenich loom she is restoring, They will get in touch with each other once the busy summer canning season winds down.  Amanda is also delving into soap making, so that is her next interest.  I have done canning of course, and did a stint of soap making too.  Our Loomatic Workshop group used to sell bars of soap that daughter Erin and I made ... it was fun.

Now back to the reason we were out there....

The total bill came to just under $500 which is very good in our eyes.  Of course it is tough to ever pay anyone for work on our meager budget, but we felt confident that the work was done well.  As Steve drove the rig home, the dash air was blasting icy cold.  Perfect! 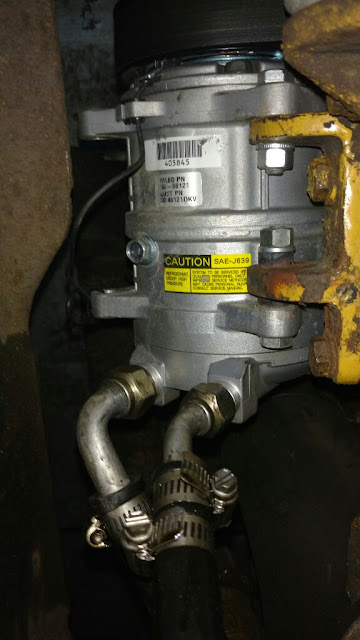 Other stuff the last few days have kept us hopping too.  On Thursdsay, I met our Grandson Mason at his pre-K class at 11 a.m..  It was a special day for us to hang out, go to lunch and have some fun. 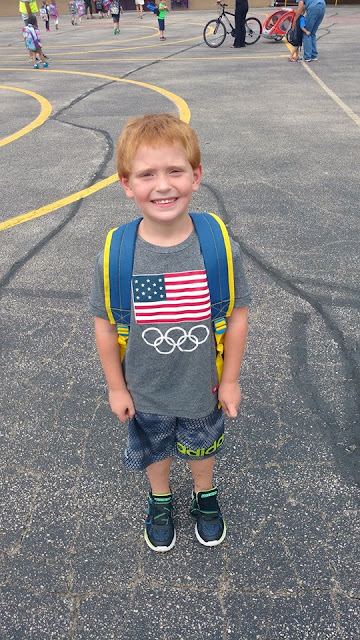 We had originally planned to hit Godfathers on Ridge Road in Green Bay for pizza... but sadly, they are closed up and the entire site is being reconfigured for a Kwik Trip gas station. Bummer!   Masons choice for lunch then leaned towards chicken mcnuggets at McDonalds.  Eewwww but we went and he got his kids meal and toy.   We saved french fries rolled up in our napkins to give to his Tiger dog and for our Finney and Binney.

From there we went to the fabric store as I needed a triangle template for an upcoming class I am taking. He was so proud to hand over the coupon and money and carry out Grandmas triangle to the car!  hahaha My little shopper boy.  He said he wanted to go to MORE stores and saw the mall. He said it was HIS mall, and wanted to go shopping.  I said I can not afford to go there, too expensive. I am poor.  He said to not worry, just go to his Moms bank and get more money!  HAHAHAHAHA!

I had a better idea.

We drove over to Colburn Park in Green Bay on the west side.  When my girls were little, they called it Squirrel Park.  We played for a while on the playground stuff, and then went over to the *big hill* used for sledding in the winter.  When my girls were little, I would load up their friends, sleds, boots, hats, mittens etc. into my motorhome and drive it over to this sledding hill.  They could play for hours, coming in for potty breaks, hot cocoa, drying out mittens or getting fresh pairs, and we would toss in pizzas into the oven for a meal when they were done.  It was only a few miles from our house, but it sure was a fun way to take the kids sledding!

Before bringing him home, we stopped at a rummage sale.  We found more Halloween decorations to decorate our campsite at the upcoming event at High Cliff in October. The lady at the sale gave little Mason a big stuffed monkey to take camping, and also a gorilla for his older sister to take along too. 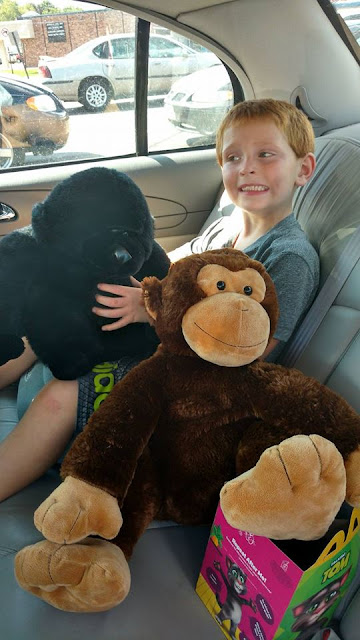 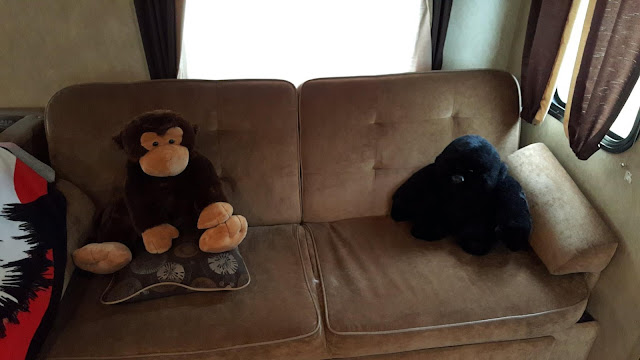 I really think the highlight of his day was this...
we saw a car getting loaded on a flat bed tow truck.
Not only did I spend the time letting him watch,
but I even moved the car to a better viewing vantage point to watch the action! 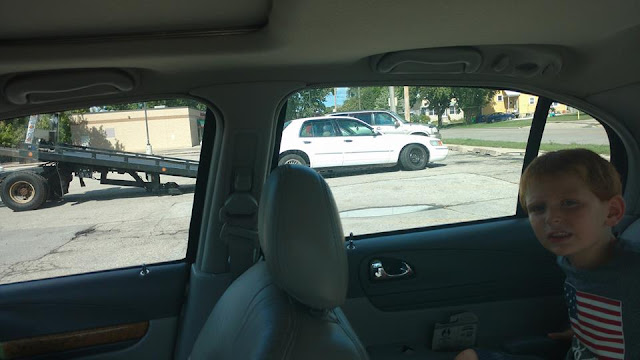 I delivered him back at home in time to meet his mom and sister after she was done with school.  It was a great day to have some one on one with him. Here he is on the Pfundtner bench in their front yard. We gave it to them when we sold the house up in Oconto. It says Pfundtner est. 1997 the year Steve and I got married.  What a little man, carrying on the Pfundtner name into the next generation. He is the only Pfundtner male left to do this.  You got big shoes to fill, Mason. 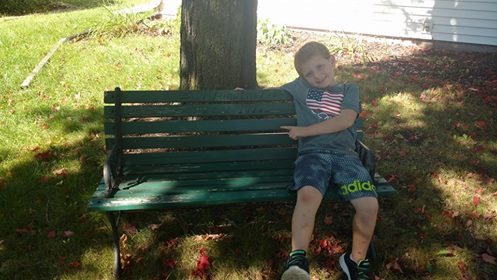 Friday evening we had a nice invite from Steves brother Pete.  We had an outdoor picnic dinner with his dad too, for the Rotary club his brother Pete belongs to.  It was your choice of LOBSTER or grilled SALMON!   Of course I chose the lobster!!!!   Yummmmmm they have live music and some wonderful beverages available to go along.  Sipping wine in the park with a couple handsome men was a great way to spend the evening.  Steves dad is training his dog Millie for companion dog for nursing home and hospital visits, so she was *working* in her little red vest on duty. Sadly the rain was taking over the evening, so we headed on back towards home.

On the way home, we met up with our soninlaw Waylen and the kids. They were headed to Madison to spend the night with Erin at a hotel where she was for business.  We nabbed their two little furball dogs for a sleepover at our house while the humans went on to Madison to enjoy the indoor waterpark at their hotel.

Little muttenheimerss Biscuit (the while Bichon mix) and Ewok (the black Cairn Terrier mix) are both rescues from the pound.  They are a handful and full of piss n vinegar. 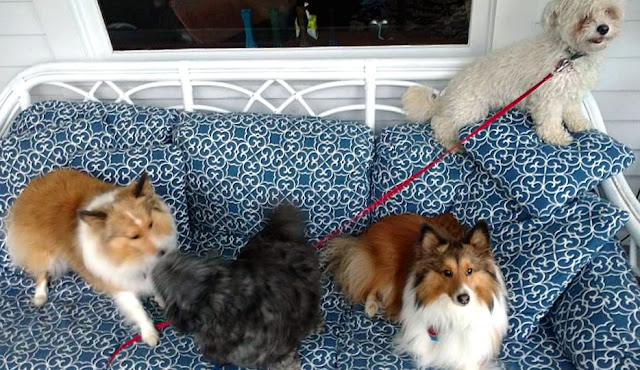 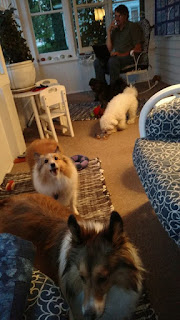 They have come to our house before and gladly romped and played with our dogs.  Galloping pups around and around the house.   Up the stairs, down the stairs.  Around and around through livingroom, diningroom, loom room, foyer in big loops.  In and out of the porch, Up and down from the couches.  Whew!!!!!

Little Ewok bonded to Steve.  He is laying at Steves feet and does not want him out of his sight.  He is underfoot no matter what Steve is trying to do.  His furry body was constantly clamped onto his foot, so much so that Steve called him a *Mutt Luk*   hahahaha 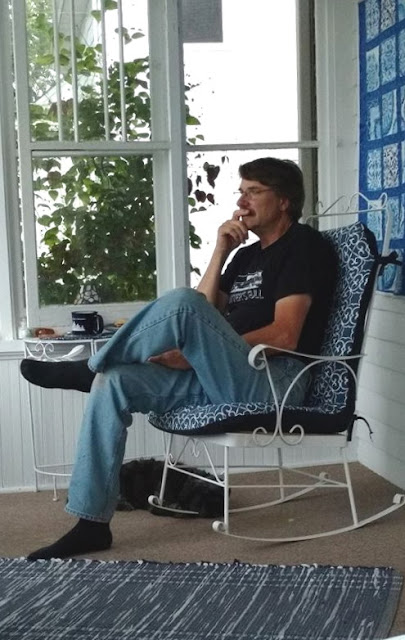 I finally got all four to settle down and become couch potatoes.
It was a Four Dog Night. 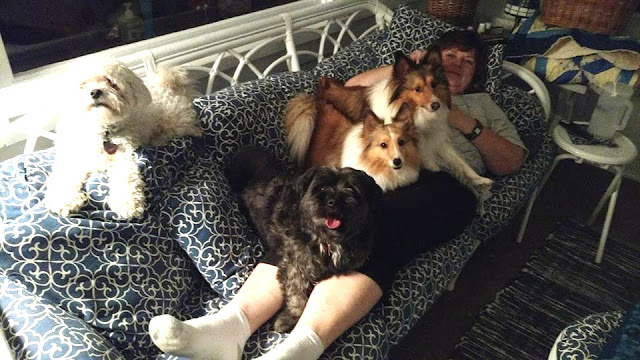 The kids came to pick up the dogs on Saturday afternoon,
and treated us out to a nice lunch
at our favorite Mexican restaurant in Chilton,
Lupitas Mexican Store and Restaurant

I had my usual, a seafood chimichanga while the others all tried various dishes.  The guacamole is wonderful and the chips nice and fresh.  We eat good Mexican food down in the southwest and in Mexico, this compares very well.  Authentic.

After hugs and kisses goodbye, the dogs and kids all headed home.  Grandpa and I headed to bed for a NAP!!!!

Today is Packer Game day at noon, and a few projects around the yard. I am warping up the loom I restored (winding on threads) and might be weaving on it by tomorrow.  So it goes at Our Old House.

Posted by KarenInTheWoods at 10:10 AM